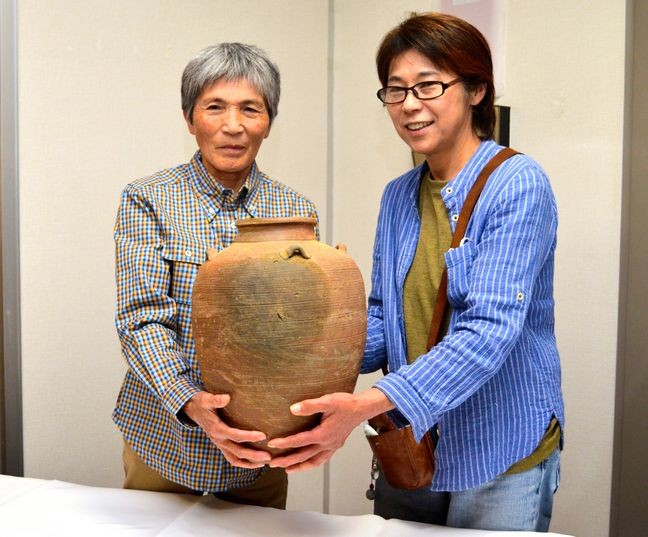 Masako Kudo, right, and Miyoe Yokoyama display the medieval four-eared pot they discovered while out on a stroll in the countryside. The artifact, shown April 21, is on display at the Mizunami Ceramic Museum in Mizunami, Gifu Prefecture, through May 22. (Hiroto Motoi)

MIZUNAMI, Gifu Prefecture--Two friends out for a stroll in the countryside here chanced upon a partially buried iron-glazed four-eared ceramic pot thought to date to the Muromachi Period (1336-1573), a find hailed by archaeologists as extremely rare.

The pair were walking in this central Japan city’s rugged Ryugin-kyo gorge when they came across the almost intact artifact, the municipal Mizunami Ceramic Museum said.

It was discovered last Dec. 21 by Masako Kudo, who lives in a nearby area, and Miyoe Yokoyama, a resident of Kani, Gifu Prefecture.

The artifact was found almost intact. The museum is exhibiting the earthenware pot through May 22.

It is 38.7 centimeters tall, measures 28.5 cm across at its widest part and boasts a striped pattern. Part of it was visible, so the pair started digging, which yielded an ear-shaped protuberance characteristic of a four-eared pot.

Kudo and Yokoyama had previously taken part in an excavation of a burial mound and immediately notified the museum of their find, reckoning it could be a relic of value.

Researchers said the pot was likely produced in the Seto area of Aichi Prefecture in the early or mid-15th century during the Muromachi Period by stacking rings of clay coils.

How the pot ended up in such a remote location remains a matter of conjecture as no historical records exist of homes or other structures ever having been built in the area.

Experts noted that there were no signs the pot was once covered with a lid.

“It was likely used in a religious, rather than practical, way as a container of sacred writings or other objects, but its purpose remains unknown,” said Shinji Sunada, a curator with the museum.

“It has a carefully finished surface,” Sunada added. “It is extremely rare to unearth an artifact of this type in such excellent condition.”