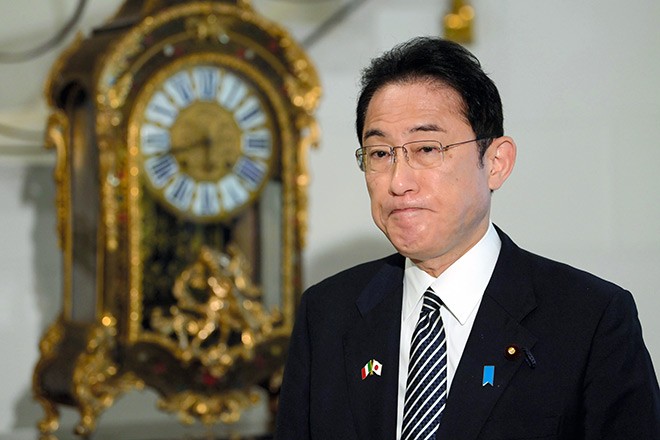 Japan blasted Russia’s announcement on May 4 that 63 Japanese individuals, including Prime Minister Fumio Kishida, would be banned from entering the country for an indefinite period.

“It is simply unacceptable,” Kishida told reporters while on an official trip in Italy.

Sanae Takaichi, the ruling Liberal Democratic Party’s policy chief, and Kazuo Shii, who heads the Japanese Communist Party, are also banned from Russia, as are some members of junior coalition partner Komeito and opposition parties, such as the Constitutional Democratic Party of Japan and Nippon Ishin (Japanese Innovation Party).

In addition, the entry ban covers senior officials of the National Security Secretariat, the Foreign Ministry, Keizai Doyukai (Japan Association of Corporate Executives), people pushing for Russia to return the Northern Territories to Japan, and scholars specializing in Russia and Ukraine.

Major figures in news media are also listed, such as Tsuneo Watanabe, who heads Yomiuri Shimbun Holdings, the president of the Sankei Shimbun, the chair of the Nikkei Shimbun, and the chief editor of weekly magazine Shukan Bunshun.

Moscow has not revealed details on why those 63 people were selected.

But it said in a statement, “Experts and media outlets have agreed to go along with the West and tried to damage Russia’s economy and international credibility.”

Japan has imposed a wide range of sanctions against Russia, including freezing the assets of Russian President Vladimir Putin, since his country started its invasion of Ukraine on Feb. 24.

In retaliation, Russia has designated Japan as an “unfriendly nation.”

In early April, Japan expelled eight Russians, including diplomats, at the Russian Embassy in Tokyo.