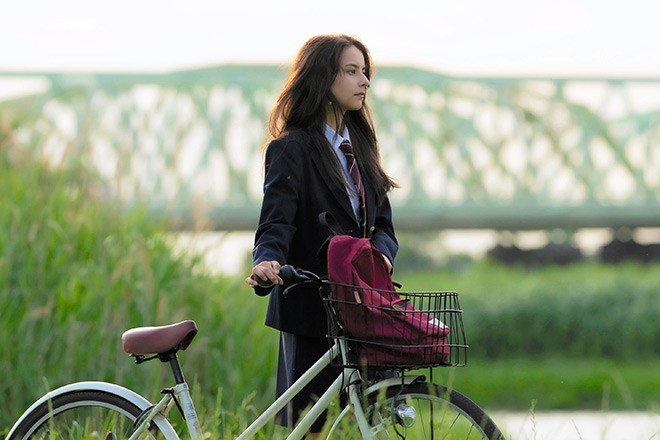 “My Small Land” depicts Japanese society from the perspective of Sarya, a Kurdish high school student. ((c) The 2022 “My Small Land” production committee)

Emma Kawawada, a filmmaker of mixed parentage, is celebrating the release of her first commercial feature “My Small Land,” which mirrors an identity crisis that she--and many foreign nationals--experience in Japan.

“I was born and raised in Japan, but I have felt excluded and sought a place I can belong to,” she said about the film that opened in theaters nationwide on May 6. “Through the movie, I want audiences to retrace what it is like to live with such a sense of rootlessness.”

Kawawada, 30, was born to a British father and a Japanese mother.

Set in Saitama Prefecture just north of Tokyo, the film revolves around Sarya, who arrived in Japan as a small child with her Kurdish parents fleeing persecution in their homeland.

She attends a high school and works part time at a convenience store to raise money to go to university.

In one scene, an elderly shopper speaks to Sarya at the counter after she noticed that Sarya’s name tag is in katakana script, marking her out as non-Japanese.

“Where are you from?” the woman asks her. “You speak good Japanese. When will you return (to your country)? Good luck!”

The exchange, perhaps intended to be good-natured, tears at the heart of Sarya, who converses easily in Japanese.

Sarya lives with her father as well as a younger brother and sister who were born in Japan. Her mother died during her childhood.

Her life drastically changes when her father’s application for refugee status is rejected, stripping the family of four of their immigration status.

As foreign nationals provisionally released from detention at an immigration facility, they are prohibited from taking jobs or traveling to other prefectures.

Lina Arashi, a fashion model with her roots in Japan, Germany, Iran, Iraq and Russia, made her film debut as Sarya.

“I am still asked ‘Which country are you from?’ and handed a foreign-language menu at restaurants, although I have no trouble reading kanji characters,” she said.

Arashi, 17, described the scene of the shopper praising Sarya’s Japanese ability as illustrating “the common dilemma I face.”

“I think I was able to act out the scene in a natural way,” she said.

Kawawada interviewed Kurdish and other foreign residents in Japan and weaved their tales of woe with her own experiences to write the screenplay.

In one scene, Sarya is asked by her Japanese classmates which country she cheers for in the soccer World Cup or Olympics. Hearing her say she will root for Japan, they ask her why.

Sarya uses a hair straightener every morning to make her hair appear more like her Japanese friends. But she is innocently pushed into the “foreigner” category as she is envied for her “long eyelashes” and told to “take advantage of your (non-Japanese) looks.”

An estimated 2,000 Kurds live in and around the cities of Kawaguchi and Warabi in Saitama Prefecture, accounting for 80 percent of the Kurdish population in Japan. Many are said to have no immigration status.

When Kawawada asked Arashi during the audition what her nationality is, Arashi said with a smile: “I want to say I am a Japanese, but people around me do not see me that way.”

“Her words marked a sharp contrast to her cheerful expression, which gave me confidence that she would be able to represent the unstable situation in which many Kurdish children find themselves,” said Kawawada.

“My Small Land” premiered in the Generation section of the Berlin International Film Festival in February and received a special mention from the Amnesty International jury.

(This article was compiled from reports by Etsuko Akuzawa and other staff writers.)