‘Japan is a buy,’ Kishida tells City of London 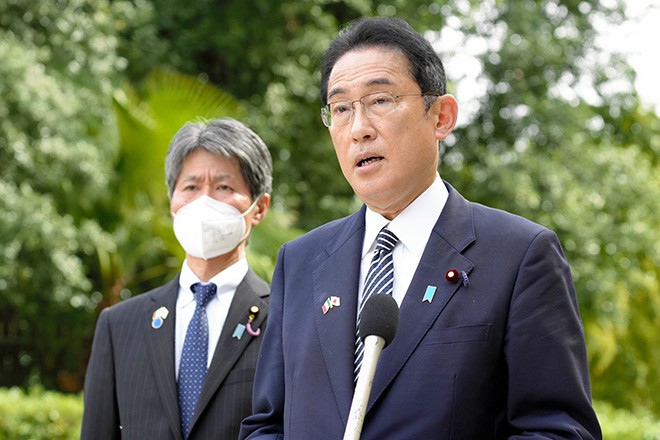 Prime Minister Fumio Kishida speaks to reporters in Rome on May 4. (Pool)

LONDON--Prime Minister Fumio Kishida on Thursday said Japan's economy would continue to see robust growth and told an audience in London that its shift to an upgraded version of capitalism meant investors could back the "powerhouse" with confidence.

"Japan is a buy", he told the audience.

He told the audience at the Guildhall that Japan's new economic policy was an upgraded form of capitalism, in which public and private sectors worked together.

He acknowledged the country would face labor challenges and said companies there needed to become more diverse. He added that the government would introduce tax incentives to encourage the private sector to boost wages, while he said further investment was needed in R&D to hit international levels.

Like countries around the world, Japan has been hit by rising energy, food and living costs that have been exacerbated in recent months by a sharp decline in the yen and the war in Ukraine.

The yen's fall to two-decade lows would normally be a boon for in-bound travelers, but Japan, fearing COVID, has kept its borders closed to tourists.

The government recently upgraded its assessment of the economy for the first time in four months, citing an expected recovery in spending, but added a caveat that the outlook was clouded.

Kishida had been on an extended visit to Southeast Asia before he arrived in London to address the City of London and later meet British Prime Minister Boris Johnson.