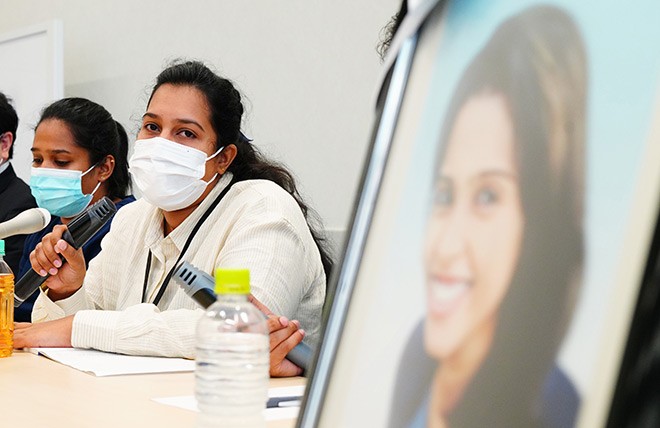 With a photo of the late Wishma Sandamali, her sisters Poornima, second from left, and Wayomi, far left, speak at a news conference in Tokyo on Aug. 10, 2021. (Rei Kishitsu)

The more than two years of the new coronavirus pandemic have brought to light many contradictions and problems in this nation.

One is the inadequate protection of the human rights of foreign residents in Japan. Foreign residents are members of our society and play vital roles in our daily lives and the nation’s economy.

Despite their importance for Japanese society, their rights and freedom are not adequately guaranteed. Many foreign residents have suffered various hardships during the pandemic.

Human rights are universal and inalienable and transcend differences in such human attributes as gender, ethnicity and nationality. It is unacceptable for Japan to allow this serious problem, created by constitutional holes, to remain unaddressed.

The title of Chapter 3 of the Constitution, which defines the basic human rights guaranteed by the supreme law of the land, is “Rights and Duties of the People.” At a glance, it seems that these rights and duties apply only to Japanese nationals.

But the 1978 Supreme Court ruling on the case of Ronald McLean versus the justice minister over the ministry’s refusal to renew the American citizen’s period of stay in Japan is often cited as a precedent for recognition that the Constitution guarantees civil rights for foreign residents in Japan.

The Grand Bench of the top court ruled that the constitutional guarantee of human rights extends to foreign nationals staying in Japan, except those that are considered to be applicable only to Japanese because of their nature.

The ruling has been criticized by various quarters for giving excessively wide discretion to the government over whether to permit foreign nationals to stay in Japan. But that does not mean the ruling’s argument concerning constitutional guarantee of the human rights of foreign residents can be seen as mere lip service.

This precedent should be used for constant assessments of the human rights conditions of foreign residents and serious efforts to ensure that they receive fair and proper treatment.

The times have changed radically since the Supreme Court handed down the ruling. There were a record 1,727,000 foreign workers in Japan as of October last year despite slower growth in their numbers due to the pandemic.

When strict COVID-19 border control measures caused a sharp decline in new entries to the country, there were serious concerns over the survival of a wide range of businesses, including agricultural, fisheries and convenience stores. That underscored afresh how heavily Japanese society depends on foreign workers.

But what kind of working conditions are they facing?

Many foreign nationals working in Japan are low-paid, non-regular workers who have to put in long hours. There are cases where foreign workers find it difficult to quit their unsatisfactory jobs because their employers effectively keep their passports.

They have been targeted in staffing adjustments in response to the slump triggered by the pandemic, with many being sacked or having their work contracts discontinued.

Foreign workers are also covered by labor protection laws, but many are not informed of the rights they have under these laws, according to people supporting foreign workers.

STILL A LONG WAY TO EQUALITY FOR FOREIGNERS

One ongoing trial speaks volumes about the harsh working conditions many foreign workers are forced to endure.

A Vietnamese trainee who worked for a mandarin orange farm in Kumamoto Prefecture under the government’s Technical Intern Training Program was indicted 17 months ago.

Le Thi Thuy Linh was accused of abandoning the bodies of stillborn twins she gave birth to while alone at home. She allegedly left their bodies in a cardboard box until the next day without preparing for burial--an illegal act regarded as corpse abandonment.

Many interns working under the program believe female trainees are forced to return home if they become pregnant. Linh did not tell anyone about her pregnancy.

The Fukuoka High Court sentenced her to a suspended jail term while acknowledging her special circumstances. She appealed the ruling. Obviously, however, the issues raised by this case have broad implications that go beyond the question of whether she should be penalized.

The case has a direct bearing on the rights of working women who become pregnant and give birth. Another question that should be asked is whether there is a system to advise such women on Japan’s health care system and the benefits they are entitled to in languages they can understand.

The case also raises broader questions concerning the legal implications of the rights to pursue happiness and to a certain standard of living guaranteed by the Constitution.

When the bill to revise the Immigration Control and Refugee Recognition Law for allowing more foreigners to work in Japan was enacted three and a half years ago, the government promised to build a society where Japanese nationals and foreign residents can live together in harmony and equality.

But Japan has still a long way to go to achieve this goal.

There are many other cases that point to constitutional holes concerning the rights of foreign residents. Discriminatory language and behavior against people with different racial and ethnic backgrounds are still rampant, while the legislative initiative to give permanent foreign residents the right to vote in local elections has lost steam.

We cannot forget the death of a Sri Lankan detainee at an immigration facility. Wishma Sandamali died from illness at the Nagoya Regional Immigration Services Bureau in March last year after her complaints of poor health conditions were ignored by immigration control officers.

The case symbolizes the poor human rights consciousness of the immigration control authority, which tends to regard foreigners as people who need to be subjected to strict control and monitoring for criminal acts.

The main aim of the revision is to make it easier to deport foreigners who have overstayed their visas. After the bill was criticized by a U.N. agency and other international organizations, the government abandoned it last year.

The bill would also establish new procedures for accepting people who are not exactly refugees but need similar protection. The government claims the revision is necessary for responding to the situation in Ukraine. If so, the government should correct basic problems with the bill and submit it afresh.

Ten years have passed since the alien registration law was abolished to allow foreign residents who have stayed in Japan for three months or longer to register as residents with the local government just as Japanese nationals do.

The legislative action was a move to make it clear that the human rights of foreign residents are also guaranteed by the Constitution.

But most of the related issues that were pointed out during Diet deliberations on the legislative action remain unaddressed, including the need for stronger legislation to guarantee the human rights of foreigners and for greater transparency in immigration control administration.

Respect for human rights is one of the cardinal constitutional principles along with popular sovereignty and pacifism.

The preamble to the Constitution declares, “We, the Japanese people, pledge our national honor to accomplish these high ideals and purposes with all our resources.” We need to honor this pledge.