Kishida indicates entry rules on foreigners to ease in June 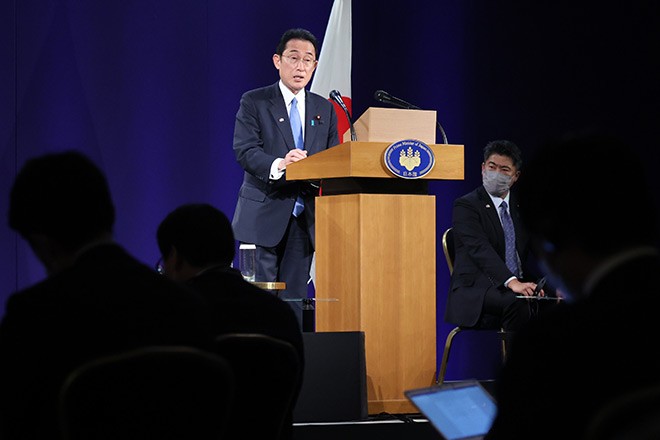 Prime Minister Fumio Kishida holds a news conference in London on May 5. (Pool)

LONDON--Prime Minister Fumio Kishida indicated that Japan will ease entry restrictions against foreigners in June and relax other measures that have been imposed to prevent novel coronavirus infections.

“While taking into consideration the view of experts, we want to gradually review our infection-prevention measures, including entry restrictions, as early as June so that we can move further toward returning to normalcy,” Kishida said at a news conference here on May 5.

In a speech earlier in the day, Kishida said Japan’s entry restrictions would be relaxed to the levels of other Group of Seven nations by June.

At the news conference, Kishida said new COVID-19 cases were declining in major urban centers, but there was a still a need to assess the effects of heightened activity and movement in the Golden Week of national holidays.

He also said his administration would take a two-stage approach toward restoring economic activity from the negative effects of the health crisis.

He said the first stage would consist of emergency measures compiled in April to deal with surging consumer prices, due in part to Russia’s invasion of Ukraine.

The second stage, he said, would involve setting a vision and implementation plan for his “new capitalism.”

Kishida said specific measures would be presented after the Upper House election this summer. They will enable Japan to take the lead in changing the structure of the economy and society, including in the energy sector, he said.

Kishida on May 5 concluded a trip that took him to Southeast Asia and Europe.