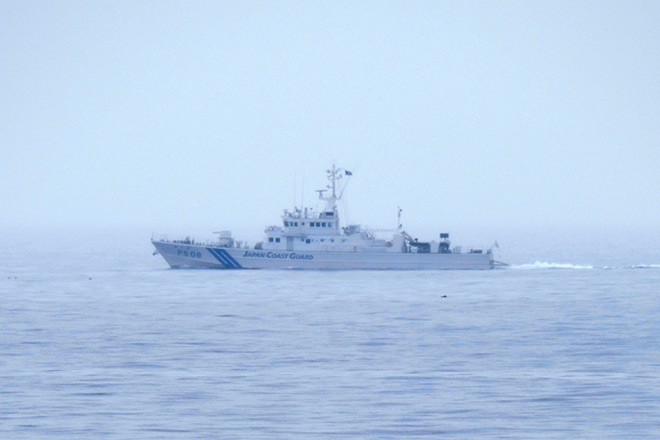 A Japan Coast Guard vessel navigates the waters off the coast of Rausu town in Hokkaido, on the east side of the Shiretoko Peninsula, on May 4. (Shigetaka Kodama)

The Japan Coast Guard extended its search operation into contentious waters on May 5 as it looks for 12 missing people from a tour boat tragedy that occurred off Hokkaido in late April.

A Coast Guard vessel searched waters around Kunashiri island, one of the four disputed islands called the Northern Territories, which are controlled by Russia but claimed by Japan.

This is the first time that the First Regional Coast Guard Headquarters has searched in waters beyond the median line between Hokkaido and the Northern Territories over the tour boat accident.

The Coast Guard said a patrol vessel crossed the line around 3:15 p.m. on May 5 and conducted the search operation surrounding the sea of Kunashiri island. Japan and Russia have an agreement that requires both countries to provide as much assistance as necessary during rescue operations at sea.

The Coast Guard notified Russian authorities of the operation and coordinated the search together.

The Coast Guard and Self-Defense Forces continued to search for the missing people on May 5 but no new clues emerged, and nothing was found from the area around Kunashiri Island by evening. They also continued to search inside the boat that had sunk to the seabed by using underwater cameras.

The camera that was used by the Hokkaido prefectural police had successfully reached the vessel’s interior for the first time on May 3, but Coast Guard officials said it became stuck around the tour boat and they were unable to retrieve it.

A local fishery association said on May 5 that it has ended its large-scale search operation. However, fishermen will continue to search on an individual basis going forward.

A local association consisting of four tour boat companies in Shiretoko, including Shiretoko Pleasure Boat, which ran the ill-fated cruise, had decided to suspend their businesses voluntarily until the end of the annual Golden Week holiday period.

It has since extended its suspension until the end of the month.