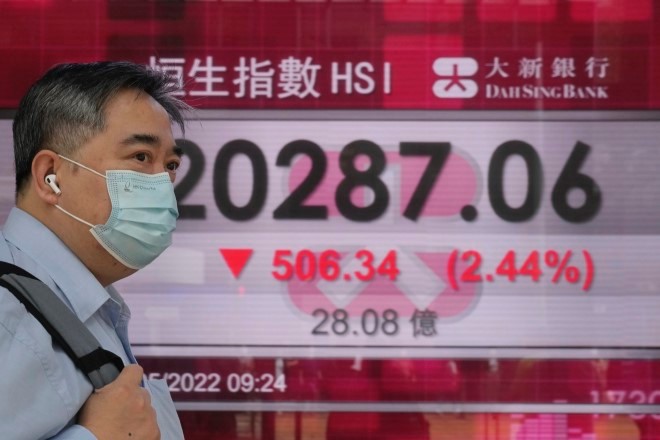 A man wearing a face mask walks past an electronic board showing the Hong Kong share index in Hong Kong, May 6, 2022. (AP Photo)

Investors worry about whether the Federal Reserve, which raised its key interest rate by a half percentage point on Wednesday, can cool inflation without tipping the slowing U.S. economy into recession. Traders were temporarily encouraged by chairman Jerome Powell’s comment that the Fed wasn’t considering even bigger increases.

“Clearly, investors had second thoughts about the so-called ‘dovish hike’ from the Fed,” Rob Carnell of ING said in a report. The likelihood is “rate hikes coming thick and fast, but little if any prospect of a turn in inflation any time soon.”

Also Thursday, the Bank of England raised its benchmark rate to the highest level in 13 years, its fourth hike since December to cool British inflation that is running at 30-year highs.

The U.S. government was due to report employment numbers on Thursday, a closely watched data point.

Economists at BNP Paribas still expect the Fed to keep hiking the federal funds rate until it reaches a range of 3 percent to 3.25 percent, up from zero to 0.25 percent earlier this year.

Energy markets remain volatile as the conflict in Ukraine continues and demand remains high amid tight supplies of oil. European governments are trying to replace energy supplies from Russia and are considering an embargo. OPEC and allied oil-producing countries decided Thursday to gradually increase the flows of crude they send to the world.

Benchmark U.S. crude gained 77 cents to $109.03 in electronic trading on the New York Mercantile Exchange. The contract rose 45 cents to $108.26 on Thursday. Brent crude, the price basis for international oil trading, advanced 75 cents to $111.65 per barrel in London.