The magical ‘Kingdom’ where the art of war is on display 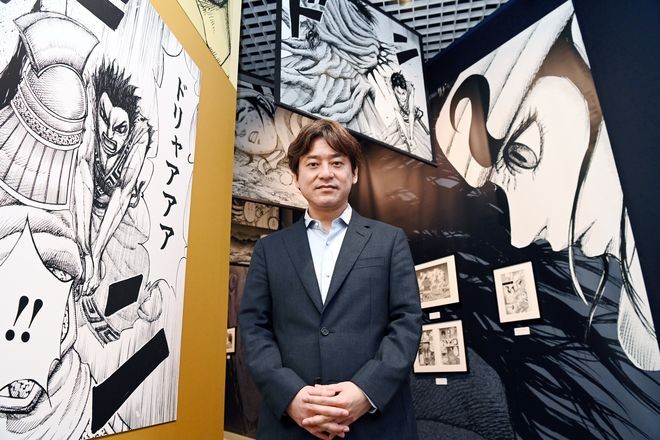 NAGOYA--Welcome to the “Kingdom,” in this case a vast exhibition space adorned with eye-catching original drawings and oversized graphic works of the massively popular manga series of the same name so fans can immerse themselves in the storyline.

“The concept is based on allowing visitors to feel as if they are reading a comic book as they look at the the exhibits,” said Yasuhisa Hara, the creator of the “Kingdom” series, a fictionalized account of China’s Spring and Autumn and Warring States periods (770 to 221 B.C.). “I want visitors to be comfortable while they walk around this space.”

“Kingdom Exhibition: The Road of Shin,” which displays original paintings from “Kingdom,” was first held in Tokyo last year. It was the first time for Hara, 46, to organize an exhibition of this scale on a nationwide basis.

He oversaw the exhibit’s displays and artistic gems can be found in every nook and cranny of the spacious venue of the exhibition that runs until June 11 at the Matsuzakaya Museum in Nagoya’s Naka Ward.

Among the items on display are more than 400 original drawings and enlarged images of key characters as well as especially impressive scenes. Hara spent four days finishing a massive ink painting of Gen. Wang Qi, a key character in the series, for the show.

The large paintaing depicts a scene where Gen. Wang dies after a fierce battle, creating a “solemn atmosphere,” Hara said.

“Kingdom,” first serialized in 2006 in Shueisha Inc.’s Weekly Young Jump comic anthology, is one of the best-selling manga series of all time.

In the manga, its protagonist, Li Xin, or Shin, fights powerful enemy generals and distinguishes himself in war by relentlessly pursuing his goal of becoming the greatest general in the world. The Spring and Autumn and Warring States periods raged until the Qin Dynasty unified China.

Sixty-four volumes have been released to date with more than 87 million copies sold. The exhibition focuses on the first 40 volumes.

Many of the works on display depict the way Li Xin, an ordinary boy, made his mark as a general by working with his comrades. Other notable scenes are reproduced with the aim of overwhelming visitors with visual content.

Hara said he realized the appeal of original paintings after viewing works by Takehiko Inoue, a manga artist renowned for his “Slam Dunk” and “Vagabond” series, with whom he once worked as an assistant.

“I was deeply impressed by his raw paintings,” said Hara. “To my amazement, I felt that original drawings from ‘Vagabond’ appeared in 3-D format.”

Hara said this experience emboldened him to hold an exhibition of his own works at some point.

“I hope viewers will experience a different feeling compared to when they look at printed pictures,” he added.

Though “Kingdom” has already run in the anthology for 16 years, Hara said he is still doing scenes based around the seventh station toward the end of the story although he has an ending in mind.

“How the work ends cannot change from the start as it is based on historical facts,” Hara said. “But my aim is to be even more amusing and profound in my storytelling as the story draws to a close. I am continuing to paint with only that in mind.”

Taking on a key period in Chinese history as the subject matter did not daunt him in the least.

“I work just in the same way as I do when I create modern stories,” he said. “For that reason, I hope readers find the manga realistic.”

On the day Hara went to Nagoya to check on showpieces at the display in advance, he devoted himself to painting until morning.

“Only humans find joy in watching ink on paper independently of what they’re doing in their daily lives,” Hara said. “As an artist, this is how I get my kicks. But first and foremost I want readers to be amused.”

Then, he explained what has driven him for so many years.

“People frequently ask me what kind of break I take, but the only option for me to relieve stress is to create interesting stories that I am happy with,” he added. “Even when I am doing other things, frustration cannot be vented easily unless I am doing well in my tasks. So I simply keep on painting.”

A tiny callus on his right middle finger, caused by the way he tightly clutches pens when drawing, attests to the hours of concentration Hara puts into his works.

It begs the question of how long Hara spends each day on cartoons.

“I feel I am focusing on (manga) all day except when I am sleeping,” he said with a grin.

The “Kingdom Exhibition: The Road of Shin” exhibition organized by The Asahi Shimbun and other entities was also held in Fukuoka.