Parents worry about health of their children if wearing masks 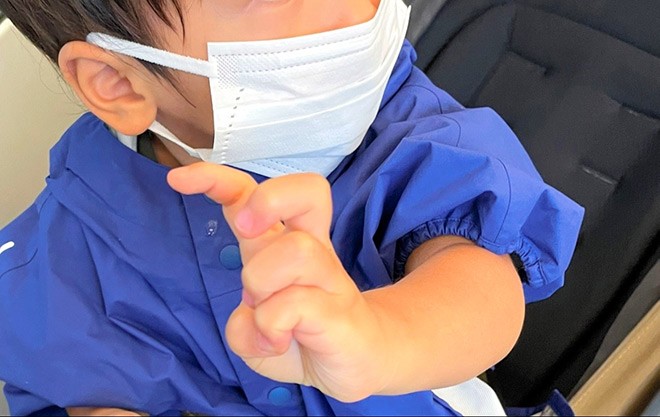 A 2-year-old child wears a mask, although the youngster often tries to remove it (Natsumi Nakai)

After the government’s mask policy for children was announced in February, a mother reported being told more often to make her 3-year-old son wear one when they go out.

“People previously seemed to accept small children being unable to constantly wear masks but the situation has suddenly changed, with many places being stricter about little ones wearing them all the time,” said the 35-year-old Tokyo resident.

When her oldest son took off his mask at a library, a staffer quickly told him to put it back on.

The woman said she tries to get her son to keep his mask on when riding buses and trains, but he simply can't handle wearing it for hours on end. He removes his mask on many occasions.

“I want him to wear a mask, if possible,” the mother said. “But sometimes it's impossible, depending on his temperament that day. The looks we get from people around us when he can't, though, are unbelievable.”

Parents are struggling to keep masks on their small children as they tend to dislike anything on their faces and are susceptible to heatstroke.

The government recommended a few months earlier that children don face coverings “as much as they can” at day care centers as a precaution against novel coronavirus infections.

With summer approaching, there are growing concerns among parents and experts over health problems that could arise from the practice.

Children are said to be more affected by outside temperatures than adults, increasing their risk of heatstroke as they have a larger surface area of skin per unit weight.

The young mother said she had a bad experience in April with her son, when the temperatures were in the 20s.

They went to a park, where her son donned a mask when playing close to other children at a sandbox and elsewhere.

Before the woman knew it, however, her child was sweating. When she took off his mask to let him drink some water, she found that his cheeks were red. She quickly took him home so he could rest.

“Adults can decide whether to take off masks by factoring in the environment around them, but children who can't may get sick,” the mother said.

Her son started attending a higher class at his nursery school in April and children there are required to wear masks.

“I told him it's fine to remove the mask if he feels hot, but I'm worried that it may be difficult for him to judge," she said.

Masks also make it difficult to read children’s expressions. How can parents know their child needs to have their masks removed to avoid heatstroke?

Kazue Kawakami, head of the Kazue Kids Clinic in Tokyo’s Shibuya Ward, said adults should remove the mask as soon as possible if children “have reddish faces or seem to be having trouble breathing.”

“Masks trap our exhalations within, lowering the body’s ability to adapt to humidity and making wearers vulnerable to heatstroke,” Kawakami said.

She said it is important to ensure children are drinking enough water or are urinating at proper intervals to prevent dehydration. Children need to be monitored closely even in relatively cool seasons as well.

Kawakami noted remaining flexible on the issue is also an option.

“People should not put a mask on in all situations,” she said. “They should be removed in an outdoor environment with few people in attendance, for example, and they should be worn in crowded areas or indoors.”

Kawakami said masks are useless unless they are properly worn.

“Different children become able to properly wear masks at different ages,” she said. “Guardians should keep a careful watch on their children’s development.”

Tsuyoshi Sogo, a doctor at the hepatic and gastroenterology department for children at Saiseikai Yokohamashi Tobu Hospital, said attention should likewise be paid to the mask’s color.

Masks for children are available in a variety of colors and designs.

“Just as temperatures differ depending on whether you're wearing black or white clothes, darker-colored masks trap more heat within,” Sogo said.

Sogo offered tips with that in mind.

“The risk of heatstroke exists even at lower than 30 degrees during the current season when the body is not yet accustomed to such high temperatures,” he said.

“As the face is covered with a mask, light garments should be selected and other parts of the body cooled as a countermeasure.”

The government announced its new mask policies on May 20, which include not requiring preschool children aged 2 or older to wear masks at day care centers.