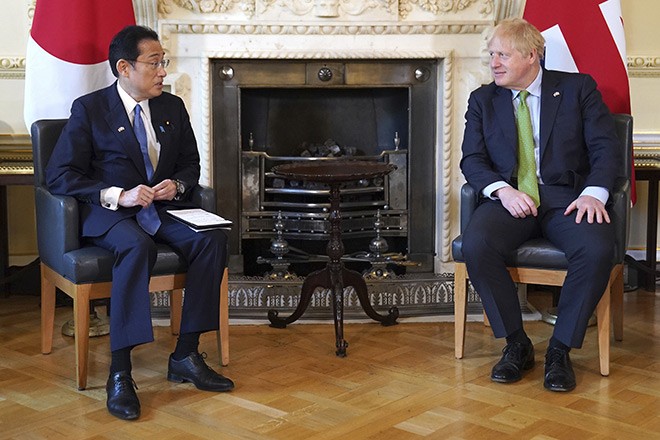 While Russia and China are challenging the existing world order, the United States remains trapped in an inward-looking mindset. In this troubling global landscape, it makes sense for Japan and Europe to enhance their relationship based on mutual support of shared values.

Prime Minister Fumio Kishida recently visited Britain and Italy after his East Asian tour. Next week, the leaders of Finland and the European Union will visit Japan following German Chancellor Olaf Scholz’s trip to this country last month. Kishida should take advantage of the diplomatic momentum being created by these interactions to develop a new, multifaceted foreign policy agenda.

Russia’s aggression against Ukraine is putting strong pressure on the international community to build a new framework to protect security. Neither the U.N. Security Council nor the Group of 20 has been able to work effectively in the face of the crisis. It is, after all, the Group of Seven leading democracies that have spearheaded international efforts to punish Russia and support Ukraine.

The G-7 is composed of major Western democratic and industrial nations in North America and Europe, plus Japan. The implications of closer ties between Japan and Europe should not be underestimated.

During the Trump administration, the relationship between Washington and Brussels became seriously strained. Japan and Europe need to remain firmly committed to supporting the diplomatic framework to protect freedom and democracy.

Europe began showing growing diplomatic interest in Asia prior to Russia’s invasion of Ukraine. For a while, Europe’s interest in Asia focused on the economic benefits it could gain from growing markets in the region. But there are signs of a change in Europe’s attitude. The Europeans have become alarmed by the rapid expansion of China’s influence and started paying closer and more critical attention to Beijing’s oppression of human rights.

Europe has every reason to be seriously concerned about China’s refusal to criticize Russia’s aggression. Europe’s expanded summitry with Tokyo signals the region’s renewed recognition of Japan as a key partner in efforts to maintain and expand their presence in Asia.

During their talks in London, Kishida and British Prime Minister Boris Johnson agreed in principle on a new security cooperation framework to facilitate joint operations between the Self-Defense Forces and the British armed services with regard to training, exercises and disaster relief. The two leaders also discussed London’s bid to join the Trans-Pacific Partnership multilateral trade agreement. The Kishida administration has announced that Japan and Germany will launch regular official talks focused on security issues.

The brutal jolt of Russia’s invasion sounded alarm bells in Europe as well as Japan. Like Russia, China is also ramping up its confrontation with the United States. Washington has to be prepared to confront security threats from Russia in Europe and from China in Asia for many years to come.

It is difficult to predict how the struggle for dominance between the major powers will pan out and prepare for risks that inevitably accompany such high-stakes competition.

Japan has a clear interest in bolstering its security cooperation with Europe while keeping its security policy solidly anchored in its alliance with the United States. This is an era that demands a multilayered diplomatic strategy.

Tokyo, however, should not forget that a confrontational approach focused on military power would not its interests or those of the region. The “Free and Open Indo-Pacific” vision Japan is promoting should not be a military initiative.

It should rather be aimed at the formation and development of an international order based on the principles of freedom, democracy and the rule of law. The Japanese government should seek stronger ties with Europe in line with this credo.

A raft of global challenges exist that Japan and Europe can tackle together effectively, ranging from global warming to arms reduction to reform of the United Nations. Tokyo should view Brussels as a crucial partner for promoting the principle of international cooperation.