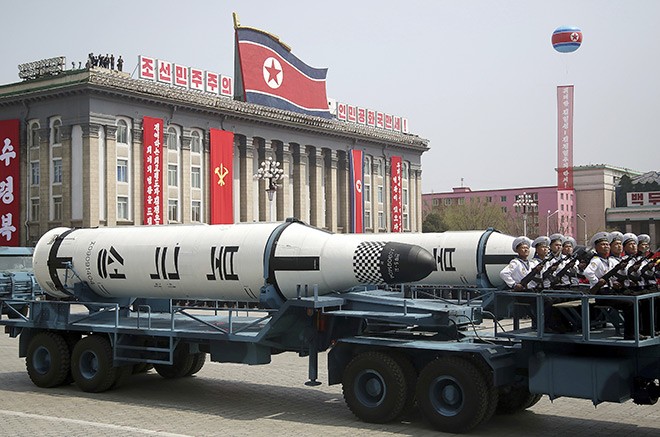 A submarine-launched ballistic missile is displayed in Kim Il Sung Square during a military parade in Pyongyang, North Korea, on April 15, 2017. (AP Photo)

SEOUL--North Korea fired a suspected ballistic missile designed to be launched from a submarine on Saturday, South Korea’s military said, apparently continuing a provocative streak in weapons demonstrations that may culminate with a nuclear test in the coming weeks or months.

South Korea’s Joint Chiefs of Staff said the launch occurred from waters near the eastern port city of Sinpo, where North Korea has a major shipyard building submarines, but it didn’t immediately say how far the missile flew. It also wasn’t clear whether the launch would have involved an actual submarine or an underwater test platform.

The launch was apparently North Korea's first demonstration of a submarine-fired ballistic system since October last year when it test-launched a new short-range missile from the 8.24 Yongung, its only known submarine capable of firing a missile, in what was its first underwater test launch since 2019.

The launch came three days after the South Korean and Japanese militaries detected the North firing a suspected ballistic missile from near its capital, Pyongyang, on Wednesday, and three days before the inauguration of South Korean President-elect Yoon Suk Yeol, who has vowed to take a tougher approach over the North’s nuclear ambitions.

The latest launch was likely North Korea’s 15th round of missile firings this year, including its first test of an intercontinental ballistic missile since 2017 that demonstrated potential range to reach the entirety of the U.S. mainland.

Experts say the unusually fast pace in testing activity underscores a brinkmanship aimed at forcing the United States to accept the idea of the North as a nuclear power and remove crippling sanctions. There are also signs that North Korea is restoring tunnels at a nuclear testing ground, where it had conducted its sixth and last nuclear test in September 2017, in possible preparations for another explosive test.

North Korean leader Kim Jong Un has punctuated his missile tests with statements warning that the North could proactively use its nuclear weapons if threatened or provoked, which experts say possibly portends an escalatory nuclear doctrine that would create greater concerns for South Korea and Japan.

Kim made one of those statements during an April 25 military parade in Pyongyang where he rolled out his ICBMs and what appeared to be a new type of missile designed to be fired from submarines.

North Korea has been pushing hard to acquire an ability to fire nuclear-armed missiles from submarines, which in theory would bolster its deterrent by ensuring a survivable capability to retaliate after absorbing a nuclear attack on land.

Ballistic missile submarines would also add a maritime threat to the North’s growing collection of solid-fuel weapons fired from land vehicles, which are being developed with an apparent aim to overwhelm missile defense systems in South Korea and Japan.

The North in recent years has been developing and testing a family of missiles named Pukguksong, which are designed to be fired from submarines or land vehicles. Still, experts say the heavily sanctioned nation would need considerably more time, resources and major technological improvements to build at least several submarines that could travel quietly in seas and reliably execute strikes.

The South Korean and Japanese militaries said the North Korean missile fired on Wednesday traveled about 500 kilometers at a maximum altitude of 800 kilometers. North Korean state media has yet to comment on that test.