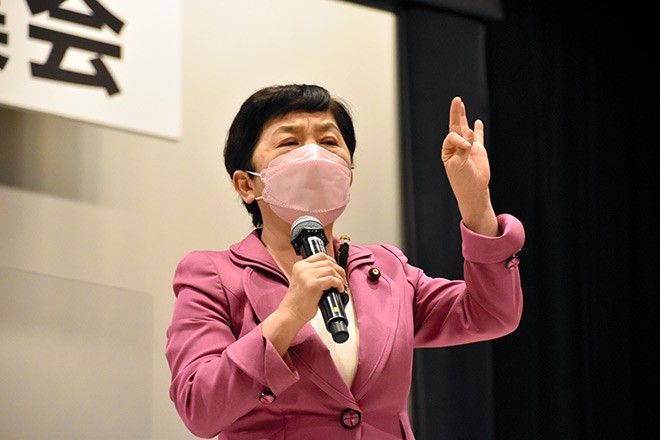 Mizuho Fukushima, head of the Social Democratic Party, speaks during a rally in Tokyo’s Chiyoda Ward on April 21 ahead of the Upper House election this summer. (Mari Fujisaki)

The opposition Social Democratic Party is going to great lengths to gain supporters, but it still might cease to exist as a political party after this summer’s Upper House election.

The SDP, once Japan’s main opposition party, will now be satisfied winning just one seat in the election. And even that is seen as a challenge.

Under the Public Offices Election Law, political parties are required to have at least five lawmakers or win at least 2 percent of all votes cast in the most recent Lower or Upper House election.

The SDP took less than 2 percent of all votes cast in the Lower House election last fall.

With only two incumbent SDP lawmakers, the 2-percent figure is considered the make-or-break line for the party, a senior member said.

“The upcoming Upper House election will be really difficult,” SDP leader Mizuho Fukushima, who is up for re-election, stressed at a rally in Tokyo on April 21. “The SDP will lose its status as a political party if it fails to garner about 1.2 million votes (to win one seat). I, too, can’t remain in the Diet (if it fails to do so).”

The Japan Socialist Party, as it was previously called, was long the largest opposition party. The SDP also formed a temporary coalition under the administration of the Democratic Party of Japan.

But the SDP’s main supporters are aging, and the party also took a hit when some of its lawmakers and local organizations joined the Constitutional Democratic Party of Japan in 2020.

That reduced the number of SDP members and associate members from about 13,000 to 8,000.

The SDP aims to win 2.4 million votes, or 4 percent of the total, in the proportional representation part of the Upper House election.

That figure is believed to be enough to secure two seats for the party. But it is still a high hurdle for the struggling SDP.

To achieve the 2-percent goal, the party is working with other political groups, such as the New Socialist Party of Japan and Greens Japan, which have local organizations across the country, to include their members in the SDP’s proportional representation bloc roster.

In addition, the SDP intends to field people of the “lost generation” in their mid-30s to mid-40s, women who lost their nonregular jobs, sexual minorities, and others disadvantaged by social issues.

In an attempt to attract nontraditional supporters, the party plans to have Fukushima provide consultations directly on social media.

Such measures are aimed at incorporating new supporters by narrowing down the targets.

But the SDP faces many problems.

The party has included just one member from the other political groups on its roster for the election.

And it currently has only one candidate to field in an electoral district to dig up votes for the party in the proportional representation segment.

The SDP also suffered a setback when a would-be candidate turned down its endorsement and went with Reiwa Shinsengumi, another minor opposition party.

During a convention held in March, some SDP members proposed a measure the party should take to achieve its goal for the Upper House election.

They said the party should allocate a candidate other than Fukushima for the special slot whose candidates are given priority in winning seats. That way, the leader won’t be re-elected unless the party wins two seats.

One senior party member sighed when noting that the election will be held in summer, the season when Japan surrendered in 1945 to end World War II.

“I only wish for a just a faint wind at this time of the year when peace, our flagship policy, is easily felt,” the member said.

(This article was written by Mari Fujisaki and Tsubasa Yokoyama.)