Tamaki unveils his vision for Okinawa ahead of anniversary 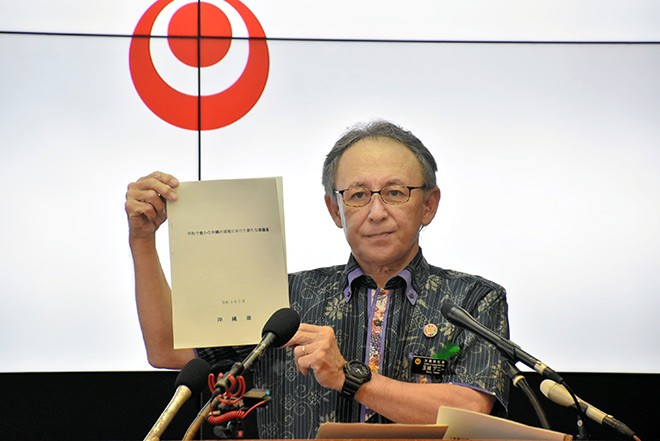 Okinawa Governor Denny Tamaki holds a copy of his proposal for Okinawa’s future ahead of the 50th anniversary of the southernmost prefecture’s return to Japan from the U.S. military rule. Photo taken at the prefectural government building in Naha on May 7 (Tsukasa Kimura)

NAHA--Okinawa Governor Denny Tamaki is issuing a four-point policy call to mark the 50th anniversary of the prefecture’s return to Japanese sovereignty that includes a renewed plea to the central government to significantly slash the island’s disproportionate U.S. military bases burden.

Other points Tamaki made in driving home his vision for Okinawa are for its economy to become self-reliant, peace building in the Asia-Pacific region and making the best use of Okinawa by drawing on its rich history as a former independent kingdom with centuries of cultural diversity.

Tamaki is due to visit Tokyo on May 10 to present his proposal to the Japanese government and U.S. representatives ahead of a May 15 ceremony to mark the milestone anniversary.

Tamaki’s proposal is in line with one compiled under the name of Chobyo Yara, the chief executive of the government of the Ryukyu Islands, in 1971, the year before the United States relinquished control of Okinawa.

Yara’s version urged the Japanese government to work to rebuild Okinawa as an island of peace with no U.S. bases.

Instead, it has been forced to shoulder the bulk of all U.S. military facilities in Japan.

With regard to the U.S. bases issue, Tamaki said Okinawa had been systemically discriminated against, citing the fact that U.S. military operations take precedence over Japanese law under the Japan-U.S. Status of Forces Agreement (SOFA).

“The fact that Okinawa hosts as much as 70 percent of all U.S. bases in Japan is absolutely abnormal and it has not changed in 50 years,” he fumed. “That is the most crucial agenda item that we will continue to speak up against.”

The proposal also calls for a sweeping overhaul of SOFA and action to eliminate the risk of accidents resulting from aircraft based at the U.S. Marine Corps Air Station Futenma in Ginowan, which sits in the middle of a crowded residential area. In this regard, it calls for cancellation of a contentious land reclamation project to relocate the functions of the Futenma facility to a new base under construction off Nago in the prefecture as it does not ease Okinawa’s U.S. base burden.

When Okinawa was returned to Japan, the government released a statement pledging that Okinawa will be made a peaceful island.

Tamaki’s proposal reaffirmed that Tokyo and Naha embraced the same goal even back then and pressed the government to promote understanding among the public at large of this shared understanding in relation to Okinawa’s return to Japan in 1972.