Submersible used for 1st time in search for boat victims

The work vessel Shinnichi Maru joins the search for victims of the April 23 Kazu I boat tragedy off the Shiretoko Peninsula in Hokkaido on May 8 using a remotely operated submersible. (Masahiko Endo) 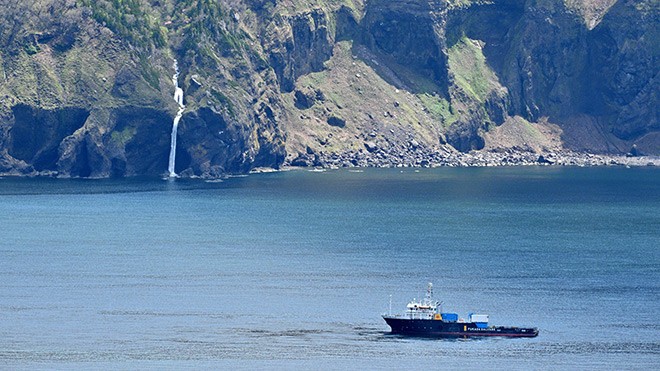 A private-sector work vessel, Shinnichi Maru, arrives near the Kashuni Falls, seen in the background, of Hokkaido’s Shiretoko Peninsula early May 8. (Hiroyuki Yamamoto)

SHARI, Hokkaido--Rescuers deployed a remotely operated submersible for the first time May 8 to search the interior of a sunken sightseeing boat as efforts continued to locate people still missing two weeks after the disaster off eastern Hokkaido.

The underwater vehicle is equipped with a high-performance camera and lighting to probe the Kazu I, which sank off the Shiretoko Peninsula on April 23 with 26 people on board.

The boat was located April 29 lying at an angle 120 meters below the sea surface.

The remotely operated vehicle is used by a private-sector working vessel, Shinnichi Maru, and expected to be able to probe the passenger cabin and other areas of the boat more closely than previous attempts by the Coast Guard, Hokkaido prefectural police and the Maritime Self-Defense Force.

A camera used by Hokkaido police took limited footage of the interior on May 3, but detected no signs of people having been trapped when the boat went down. The camera was attached to a cable which later became entangled inside the boat, prompting searchers to sever the connection. The camera was retrieved May 8, a Coast Guard source said.

The operation is technically difficult because the boat rests at a considerable depth.

Aside from the ROV, the government is planning to use divers equipped with special saturation diving apparatus, according to the source. It is also preparing to salvage the vessel.

Fourteen bodies had been recovered by May 8, and 12 people remain missing.

In a related development, Shiretoko Pleasure Boat, the operator of the Kazu I, gave a briefing to families of the passengers to explain its policy on compensation and negotiations.

A lawyer representing the company said the firm’s insurance policy would allow a payout of up to 100 million yen ($765,990) per victim, according to someone who was present at the session.