VOX POPULI: Take time to appreciate every moment possible with your mother 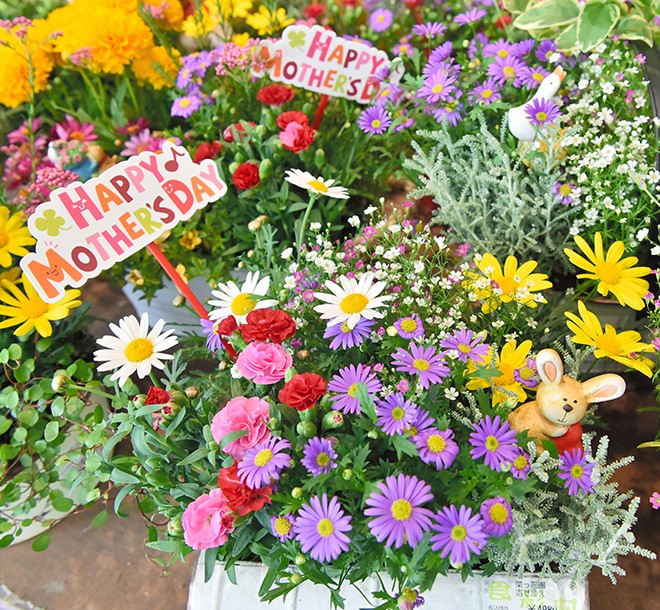 Flowers for Mother’s Day being sold at a roadside station in Toyohashi, Aichi Prefecture, on May 5 (Noboru Tomura)

People we admired while we were junior or senior high school students looked much older to us. Later, however, we realized the age difference was not that great.

We can have similar feelings about the age differences between ourselves and our parents.

When we feel our parents have grown old, we also naturally notice how long we have lived.

“The handkerchief is getting old/ Following my mother/ As she is growing older.”

Tanka poet Sumiko Ikeda, who composed this poem, says her mother suddenly started showing signs of aging. As she thinks about her mother’s declining years, her mind naturally turns to how she will spend the rest of her life as well.

Still, Ikeda writes in one of her essays, “I should feel grateful and blessed that I am lamenting the aging of my mother” because she could not see how her father aged as he died in the war.

In her mind, he forever remains a young, slender man, she says in a collection of her essays titled “Honto wa aitashi” (To be honest, I want to see them).

May 8 was Mother’s Day. We sometimes feel close to our parents even when we live apart from them--when we notice we are doing household chores the same way our parents do, for instance, or when we wonder when we began to speak like them.

Many people probably saw their parents in person during the Golden Week holidays for the first time since the new coronavirus pandemic began.

But conversation topics with our parents are mostly mundane, unimportant things, such as anecdotes from the past we talked about many times before and recent TV programs. Even so, the time we spend with our parents is of timeless value.

One tanka poem composed by Mitsuko Ishibashi and published several years ago in The Asahi Shimbun’s Kadan tanka section teaches us that.

“Mom, a golden oldie TV show starts at eight/ Oh, I no longer need/ To call her to say that.”

Call your parents while you can. When the day comes that you can no longer do that, you can turn a dial in your mind and remember them.