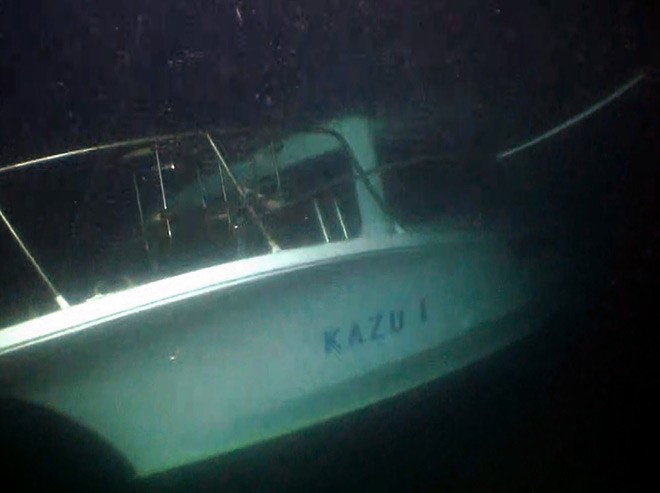 An image shot by the remotely operated submersible Hakuyo on May 8 shows the sunken Kazu I tour boat. (Provided by the First Regional Coast Guard Headquarters)

Japan Coast Guard officials released two new images showing a sunken sightseeing boat off eastern Hokkaido tilting to the right on the seabed but offering no further hint to the whereabouts of those still missing.

A remotely operated submersible called Hakuyo equipped with a high-performance camera was deployed for the first time on May 8 to search the interior of the Kazu I.

The boat sank off the Shiretoko Peninsula on April 23 with 26 people on board. Fourteen bodies had been recovered by May 8 and 12 people remain missing.

One of the images released on May 8 shows the bow of the white boat with the name Kazu I on the side, tilting to the right. The First Regional Coast Guard Headquarters, based in Otaru, Hokkaido, provided the photos.

The other image shows the stern of the boat with a door slid open to the right.

The interior of the Kazu I is dark in both images, offering little clues to its condition inside.

A private-sector work vessel called the Shinnichi Maru used the Hakuyo, which was dispatched on the evening of May 7 to the site where the tragedy occurred.

Work to probe the sunken boat about 120 meters below the sea surface using the remotely operated vehicle began on the morning of May 8.

An underwater camera the Hokkaido police used was remotely retrieved five days after it took images of the Kazu I's interior on May 3.

Rescuers obtained no clues to the whereabouts of the missing people as of the morning of May 9, according to sources.

The underwater vehicle can operate more smoothly in such an environment and is also equipped with arms.

The government is planning to commission a private-sector company by the end of May to assign divers with special saturation diving apparatuses to search the Kazu I's interior.

The divers will also check the extent of damage to the boat and the characteristics of the surrounding area to prepare to salvage the vessel, which would be wound with wires and lifted by a floating crane, sources said.