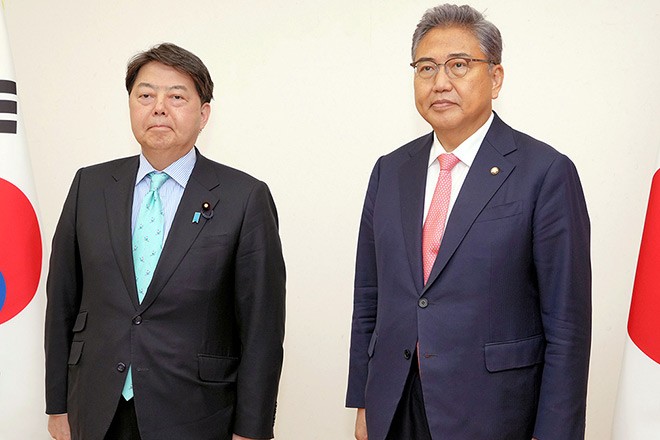 Foreign Minister Yoshimasa Hayashi, left, meets with Park Jin, the next South Korean foreign minister, in Seoul on May 9. (Provided by Foreign Ministry)

SEOUL—Foreign Minister Yoshimasa Hayashi attended the inauguration ceremony of South Korean President-elect Yoon Suk-yeol on May 10 as part of efforts to improve bilateral ties that have worsened over the past five years.

Hayashi, who attended the ceremony as Prime Minister Fumio Kishida’s special envoy, met with Park Jin, who is expected to become the next South Korean foreign minister, the previous day.

According to Foreign Ministry officials, Hayashi and Park agreed that no time should be wasted in improving Japan-South Korea ties given the various threats that have arisen against the current international order.

Regarding the recent series of missile launches by North Korea, Hayashi and Park agreed to strengthen cooperation between their two nations as well as with the United States.

Foreign Ministry sources also said the two talked about the situation in Ukraine as well as China.

Both Hayashi and Park, who speaks Japanese, attended Harvard University’s Kennedy School of Government. The meeting on May 9, which included dinner, lasted for two hours, about 30 minutes longer than initially planned.

“The overall atmosphere of the meeting was good,” a Foreign Ministry source said. “While the bilateral relationship did not suddenly improve, a good start was made in line with the inauguration of a new South Korean administration.”

In the meeting, Hayashi said there was a need to develop bilateral ties based on the foundation of the friendly relationship that has been built up since diplomatic ties were normalized in 1965.

He again touched on the various lawsuits brought by former Korean laborers and comfort women seeking compensation from Japanese companies and the government. Hayashi said there was a need to first resolve such issues.

The Japanese foreign minister said he hoped to meet with Park again soon in Japan to continue their discussions.

On May 9, Kishida told reporters in Tokyo that the difficult issues remaining between Japan and South Korea cannot be ignored.

Taro Kono’s visit to South Korea in 2018 was the last time a Japanese foreign minister visited that nation.

(This article was written by Ryo Aibara and Takuya Suzuki.)