Activist goes on hunger strike to protest Henoko base relocation 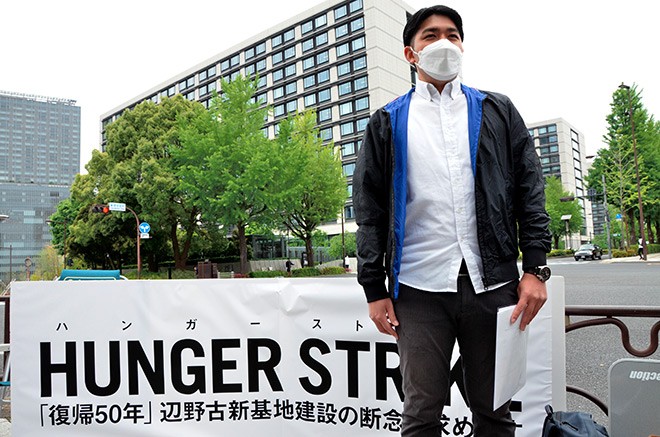 Jinshiro Motoyama goes on a hunger strike in Tokyo’s Chiyoda Ward on May 9. (Takuya Miyano)

Okinawan native Jinshiro Motoyama launched a hunger strike on May 9 in front of the prime minister's office in Tokyo over the contentious relocation of a U.S. military base in the southern prefecture.

He also plans to go on a hunger strike in Okinawa on May 15, when the prefecture will commemorate the 50th anniversary of Okinawa's reversion to Japan.

"I don't think we are in a situation where we can celebrate," said Motoyama, 30.

Motoyama called for the central government to give up its plans to relocate U.S. Marine Corps Air Station Futenma in Ginowan to the Henoko district of Nago, also in the prefecture.

The activist is from Ginowan and is a graduate student of Tokyo's Hitotsubashi University.

He is the former head of a civil group demanding a prefectural referendum on the land reclamation at the Henoko site.

When five Okinawan mayors, including the Ginowan mayor, announced they would not hold the referendum, Motoyama went on a five-day hunger strike in front of the Ginowan city government building to protest.

The referendum was held in all municipalities in 2019.

He said the central government is not respecting the voices of Okinawans as Tokyo pressed ahead with landfill work even after the prefectural referendum showed 70 percent of voters opposed the Henoko base's construction.

He said he plans to go on a hunger strike in front of the headquarters for the Liberal Democratic Party and its junior coalition partner, Komeito, on or after May 10.

In addition to abandoning the U.S. base relocation to Henoko, Motoyama is calling for the suspension of operations at the Futenma air station within a few years and reviewing the Japan-U.S. Status of Forces Agreement.