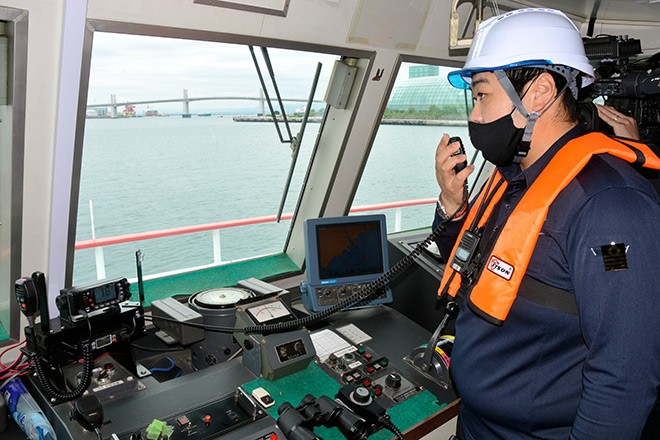 A crew member of a tour boat talks over a ham radio during an emergency check by transport ministry and Coast Guard representatives in Iwaki, Fukushima Prefecture, on April 28. The check was conducted following the sinking of a tour boat off Hokkaido earlier in the month. (Takemichi Nishibori)

The transport ministry announced on May 10 that it will conduct emergency checks on small tour boat operators nationwide to ensure they have mobile phones aboard vessels that can maintain connectivity and other safety measures in place.

The action follows the sinking of the Kazu I tour boat off Hokkaido on April 23 with 26 people aboard, including two crew members.

Several hundred companies operating small tour boats are subject to the emergency inspections, according to the ministry.

The checks include whether those companies allow tours to proceed based on an accurate grasp of weather conditions on the day; whether the boat captain maintains constant contact with an official on shore at each fixed point of the tour; and whether a tour operator has an operations manager on its staff.

The ministry plans to prioritize the inspection of operators offering tours in waters known for rough weather conditions.

In addition, the Japan Craft Inspection Organization, which is commissioned to conduct checks of small craft on behalf of the ministry, will verify whether tour courses remain in the service area of mobile phones used by tour operators.

If the organization cannot confirm a constant connectivity, it will ask operators to switch to a communications system that can be connected at all times.

If they refuse, the ministry will mandate the switch by May 25.

Of about 2,500 small pleasure boats operated across the nation, 400 have yet to confirm the status of connectivity of their mobile phones during the tour, the ministry said.

It has been found that the Kazu I, operated by Shiretoko Pleasure Boat company based in Shari, Hokkaido, had a flaw in its communications system.

The company’s operation rules cited three kinds of devices to maintain contact between the captain of a boat and the operations manager in its office: a maritime satellite phone, a mobile phone and a commercial ham radio.

But Kazu I’s satellite phone was on the blink and the ham radio at the office was also not usable with its antenna broken.

The captain had a mobile phone but it is believed that he could not get connected as the boat traveled through a zone out of the carrier’s service area during the tour.

When the Japan Coast Guard was notified of the emergency aboard the boat, a passenger's phone was used, not the skipper’s, communications data showed.

Fourteen bodies from the sinking have been recovered so far, but the whereabouts of 12 remain unknown.