Tamaki calls on Japan to debate U.S. base burden on Okinawa 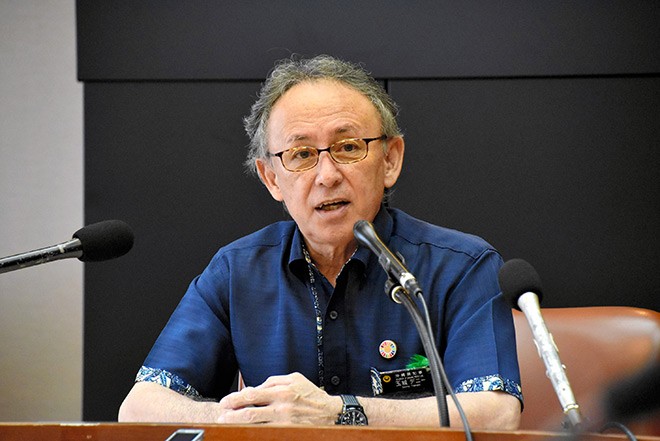 Governor Denny Tamaki speaks with reporters in a joint media interview held in the Okinawa prefectural office on May 9. (Tsukasa Kimura)

NAHA--Okinawa Governor Denny Tamaki is asking the entire nation to debate how to reduce the burden of U.S. military bases concentrated in the southern prefecture ahead of the 50th anniversary of Okinawa’s return to Japanese sovereignty.

“The whole county needs to think, have questions about the situation and discuss the matter,” Tamaki said during a joint interview with media outlets on May 9.

Tamaki said the people of Okinawa expected at the time of its return that the number of U.S. bases there would be scaled back, just like in other prefectures on the mainland.

"I must say that the current situation is far from what the people of Okinawa expected,” he said.

Okinawa Prefecture accounts for about 0.6 percent of the nation's land area, but it hosts about 70 percent of all U.S. military facilities in Japan.

Tamaki said that "the proportion of U.S. bases in Okinawa has increased since its return, as U.S. bases on the mainland have been downsized and their lands have been returned."

He pointed to some of the main reasons preventing progress in scaling back the number of bases.

“It is a problem that diplomatic and security policies are discussed only between the national governments as issues that exclusively fall under their jurisdiction,” he said. “They are not taking into account the opinions of municipalities and prefectures.”

Okinawa returned to Japanese sovereignty on May 15, 1972.