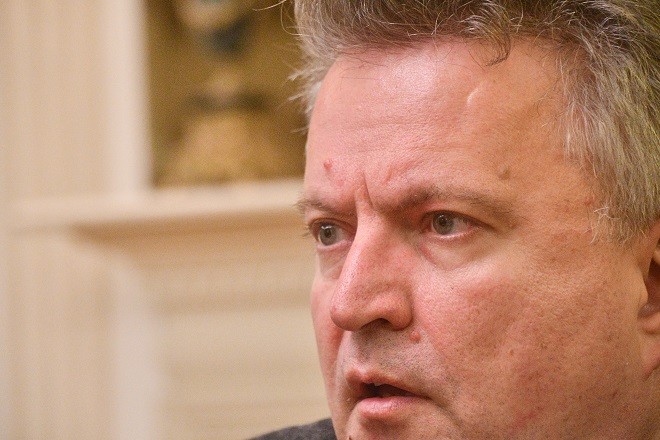 For Sergiy Kyslytsya, Ukraine’s ambassador to the United Nations, Russia’s war against his country came as no surprise and was the result of “irresponsible complacency of the international communuity” over the last 30 years.

The 52-year-old career diplomat said Russia’s actions in Moldova, Georgia and Syria should have raised an alarm in the international community. But nobody reacted, giving Russia the green light to act the same way in Ukraine.

In an interview with The Asahi Shimbun earlier this month, Kyslytsya, who has served in the Ukrainian government since 1993, said the war in Ukraine has security and economic implications for every country, including Japan, another Russian neighbor.

Kyslytsya also said those committing crimes in the war started by Russian leader Vladimir Putin must be held responsible or else Moscow will continue to do as it pleases.

Question: At the U.N. Security Council meeting on the evening of Feb. 23, did you want the Russian ambassador to confirm that Russia would not attack Ukraine?

Kyslytsya: I was of the opinion that the war was unavoidable, and that it was only a matter of time to see how (and) when the Russians would launch the war.

U.N. Secretary-General (Antonio Guterres), whom I saw in January before the war, and whom I respect a lot, is … I believe … a very decent person of very high moral standards.

I think that he was sincerely of the opinion that something that we are seeing today would never happen.

And I think that he was kind of taken by surprise in a way. If you remember his reaction when he was meeting the press next to the Security Council, he was throwing his hands like that and saying, “Mr. Putin, stop the war.”

So that was the moment for him, where (Guterres) finally made the only right decision: to defend peace and to defend the U.N. Charter.

So I’m pretty much sure that Russian Ambassador (Vasily) Nebenzya himself didn’t know what was about to happen.

Q: How did you feel during the Security Council meeting at the moment when you knew Putin had started the war?

A: After so many horrible crimes that Russia has committed in the course of the last 30 years, it’s amazing that there are still people who are so naive or want to be naive, or pretend they are naive, who would say, “No, Russia cannot commit such a crime.”

For me, it was not even a shock. Because, professionally, I have been following and dealing with so many Russia-related issues. And I’ve been working for the government of Ukraine since 1993.

It was only logical what happened that night because the whole sequence of events for the last 30 years was leading to the point where Russia, in their mindset, came to the conclusion that whatever they do, you guys would not really be able to stop them.

And now you are surprised.

Putin has been in power for 20-plus years. It’s all our guilt.

I do not accuse Japan. Prime Minister (Shinzo) Abe was so interested because he believed, he said on the tomb of his father, “I would do my best to resolve the (Northern Territories) issue.”

I would always travel to Japan and meet my counterparts in the Foreign Ministry. I would always love them because they are very nice people.

But I would always come back with a question: How in the world can they believe that any sort of deal is possible with Putin on the (disputed) islands? It was totally impossible.

Ukraine is a place with a history of many, many mistakes that we have made, including my government.

So only until after 2014, we kind of abandoned this illusion that foreign policy can be multilateral, that you can move to different parts of the world at the same time.

Q: Since Jan. 31, the Security Council has held 17 official meetings (as of May 4), and tomorrow will be the 18th one. But so far, there has been no agreement on a resolution or statement. What would you say to the Security Council or to the United Nations as a whole in terms of how they are functioning?

A: The United Nations is not perfect. The U.N. was designed in the middle of the last century to preserve the peace and to prevent future wars, reasons that, on the outside, were very noble.

But from the inside, (the reasons) were to protect, for the foreseeable future, the role and powers of the major global nations.

That’s why when (Franklin) Roosevelt and (Winston) Churchill and (Josef) Stalin met in Yalta, they agreed on the core issues, including the veto right (for permanent Security Council members). Right?

However, imagine if there is no veto right, and the Security Council is capable of approving a resolution that calls today on the Russian Federation to stop the war. I can guarantee you Russia would not care about it.

We’re not in a dynamic where you’re sitting with a democratic government that is accountable to its citizens, respectful of international law (and) vulnerable to global criticism.

No, you have exactly the opposite.

But the Security Council has a unique role to play. And even under these current circumstances, it is a platform that is super visible. It is a platform that every week has meetings on Ukraine that are broadcast everywhere except in North Korea and Russia.

Every citizen on this planet can see either live or on recorded webcast how Russia is isolated. You don’t have these kinds of meetings anywhere else because NATO meetings are closed. The meetings of the Permanent Council, which is the governing body of OSCE (Organization for Security and Co-operation in Europe), are closed. They are not broadcasted. So even this role of the Security Council is still useful.

And then the United Nations is always hit by criticism.

So we do not say that the United Nations should be abolished. Because if the U.N. is abolished, it will only serve the needs and purposes of evil. Then there is nothing, there is no global platform to address many issues.

Q: Do you think now is the turning point for the Security Council or the United Nations?

A: No. I think that it is what we would love to see.

Because there is no readily available answer to the question of what to do with a totally criminal regime that possesses a nuclear arsenal.

But if you asked me should the Security Council, should the U.N. be reviewed and learn lessons? I say “yes.”

Every September, when we have a marathon of statements, when all the presidents, including the prime minister of Japan, or foreign ministers arrive in New York, we all deliver our speeches. Nobody listens to anyone. You deliver your speech and then you run to the next appointment.

No, not this kind of discussion. We need a real conversation.

And if there is a need, our presidents or prime ministers must meet behind closed doors and have formal discussions with no press, with no reporters, nothing.

Because whatever problem you have to deal with, the first stage of any problem resolution is acknowledging that there is a problem.

Q: What do you expect the Security Council or the General Assembly to do in the near future?

A: One of the most important things is the issue of accountability. Bring into account all those guilty of crimes of war and crimes against humanity.

So I think that the track of accountability is very important for the international community, including in the framework of the United Nations.

One of many reasons why those crimes were committed in Ukraine is … because people who were responsible for crimes in Syria and in other places were not brought to account.

Because if there is no accountability, Moscow will be led to believe that while they need five or 10 years to reform their army, to remove those idiot generals and put in place smart generals to upgrade their military, they will then strike again.

There are many things that the international community and the United Nations have to take care of if they genuinely want to achieve what the initial pages of the U.N. Charter say: to preserve peace and to prevent future wars from happening.

Q: Japanese readers pay attention to what you say in the Security Council or the General Assembly, and your statements are always very strong. Is it difficult not to get emotional considering what is happening in your country?

If you get engaged emotionally with the enemy, your energy is sucked away for no reason.

I must listen because it’s my duty to listen to what a Russian diplomat may say in the Security Council. But the things that they say are so blatantly ugly that I don’t really believe that even they themselves, unless they are total degenerates, believe in what they’re saying.

But they have no option. I mean, the way they operate is probably very close to how the Soviet diplomats operated under Stalin.

It’s not only your well-being at stake. It’s also your physical security at stake. It is also the security of many family members of those Russian diplomats back in Russia.

Q: What do you expect Japan to do for Ukraine?

A: Let me return the question and ask you what does the Japanese public expect from the government of Japan to protect Japan?

This (Russia-Ukraine) conflict has security and economic implications for everyone, and especially for countries like yours, that is not only a neighbor to China, but it’s also a neighbor to the Russian Federation.

So I think … the government in Tokyo is so strong in its position on the war of Russia against Ukraine because your government is very responsible and it understands that if things like that can happen (to Ukraine), then Japan is under threat.

If Russia is allowed to violate international order so blatantly, your regional security can be the next war theater.

So my answer to you is not what I immediately expect the government of Tokyo to do for Ukraine.

(This interview was conducted by Stephanie Fillion and Gakushi Fujiwara.)