Analysis: For some envoys, war in Ukraine a make-or-break point for the U.N. 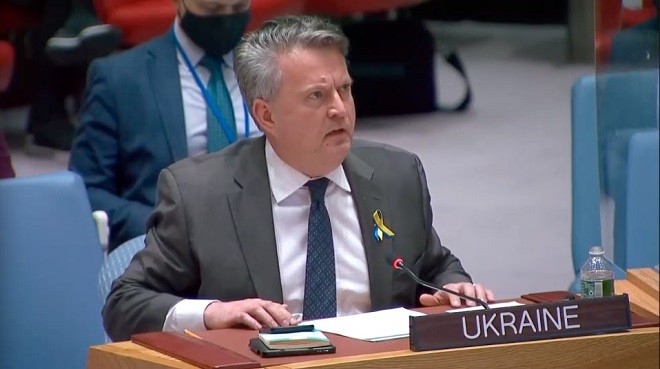 Sergiy Kyslytsya, Ukraine’s ambassador to the United Nations, speaks at a U.N. Security Council meeting on March 29. (Captured from a broadcast by UN Web TV)

On the night of Feb. 23, the U.N. Security Council feared that the long-held warnings of American and British officials were becoming a reality.

The Security Council organized an emergency meeting at 9 p.m. to ask Russian President Vladimir Putin one last time to refrain from doing what appeared to be inevitable.

What followed at the meeting were, for some, the ultimate insult to the United Nations.

In the middle of the meeting, Putin announced that his country was initiating a special military operation in Ukraine, an operation that most countries by now recognized as a full-fledged Russian invasion of Ukraine.

“I felt despair in the moment, and I was shocked,” Geraldine Byrne Nason, Ireland’s ambassador to the United Nations, told The Asahi Shimbun. “We had gone to the table to make a last-ditch call to stop the invasion, and the secretary-general was particularly emotive at the start of the meeting.’’

Byrne Nason added: “Diplomats always hope and work for peaceful resolutions, so it was a somber evening, one I will never forget. It felt like all the work to prevent the aggression came to naught.”

Some diplomats who attended the meeting did not have access to their phones and read statements that had been written before Putin’s announcement.

The United Nations has long been criticized as ineffective. But the split-screen images of “business as usual” at the Security Council during Putin’s announcement made the organization appear as out-of-touch as ever.

Many diplomats had to make additional statements at the end of the meeting to denounce the invasion.

Adding to the paradox, Russia was president of the Security Council at the time and thus host of the meeting.

As for the timing of Putin’s announcement, Diego Arria, a retired Venezuelan diplomat, said it was “not accidental.”

“Putin wanted to show that he could not care less about the international community represented that day by the (Security Council),’’ Arria said.

In the 1990s, the Venezuelan changed the working ways of the U.N. Security Council through his “Arria-formula meetings.”

“How, I ask myself, can the (Security Council) perform while Putin is in charge of Russia?” he said.

Sergiy Kyslytsya, Ukraine’s ambassador to the United Nations, said he expected Russia to invade his country because the international community has let Moscow get away with its military attacks and bombings in various countries for the past 30 years.

But like many other U.N. observers and diplomats, Kyslytsya does believe that the night of Feb. 23 was a turning point for the organization.

U.N. Secretary-General Antonio Guterres failed to see the war coming until the very last minute. On the night of Feb. 23, he made a desperate appeal to Russia, but in vain.

Kyslytsya acknowledged Guterres’ shortcoming but doesn’t think he is entirely to blame for it.

“I think he failed to see these imminent threats, not because he was a bad person, or had bad intentions, but because his level of morality probably didn’t match the ugliness of the other side,’’ the Ukrainian ambassador said.

The Security Council has met at least 20 times on the situation in Ukraine since the beginning of the year but has failed to pass a single legally binding resolution against Russia. That is because Russia’s veto power has made it impossible for the 76-year-old world body to take an official stance in the current crisis.

The U.N. General Assembly has been more active and united on the issue. Since the invasion, the policy-making body overwhelmingly adopted a resolution denouncing Russia’s actions and passed a resolution on humanitarian aid to Ukraine that the Security Council failed to pass.

Although the United Nations is still struggling to quell the war in Ukraine, the crisis could lead to some longer-term changes, according to experts.

“What I do believe will happen is that because this war has created so much anger, there’ll be a lot of talk about reform,’’ Richard Gowan, a U.N. expert at the International Crisis Group, said. “I think that the United States may actually start, for the first time in quite a long time, to become quite active in that conversation.’”

Arria, who was also an adviser to former U.N. Secretary-General Kofi Annan, believes the United Nations is now facing a make-or-break moment.

“The U.N. is at a similar turning point in which the League of Nations was in when Italy invaded Ethiopia,” he said. “And because it (U.N.) cannot really reform itself because of the veto, I think some countries might resort to creating a coalition of the willing to act outside of the U.N. realm.”

Can the United Nations be reformed?

Professor Thomas G. Weiss of the Graduate Center of the City University of New York says he is asked this question every time he gives a public lecture.

“I’ve been predicting accurately for now that during my lifetime, we’re not going to see a change, but the issue does not go away,” said Weiss, an international political scientist specializing in the United Nations.

Although there have been many attempts to reform the United Nations, nothing has been achieved to resolve the deep issues facing the Security Council.

“We have no hope for the Security Council to play a role in this period,” said Christian Wenaweser, Liechtenstein’s ambassador to the United Nations, who led the veto initiative in the General Assembly.

“But the U.N. system is not the Security Council. So we want to see an active role on the U.N. side, not only in the humanitarian area, but we also want to see the role of the United Nations in political conversations.”

Liechtenstein’s initiative, passed by acclamation in the General Assembly, is considered one step toward U.N. reform, and while it will have a normative effect, there is so much it can do.

“It’s about creating more moral pressure on countries not to use the veto,” Gowan said. “Frankly, I don’t think the Russians care. The Russians have always been sort of unworried by moral accusations about the use of the veto.”

However, Gowan said the initiative will likely have a bigger effect on China.

“China still hates using its veto, and actually even over Ukraine, China has been very careful. Not on all resolutions (but) on most resolutions connected to Ukraine, it has abstained,” Gowan said.

Andreas Bummel, a founder of Democracy Without Borders, an organization promoting democracy around the globe, said that although there appears to be momentum for U.N. reform, it may not necessarily be genuine for now.

“The dysfunction, the institutional structure is also a scapegoat for themselves to do nothing (but) just sit there and complain about the situation and the structures that are stopping them from doing anything,” he said. “Because the reality is, if there was strong political will, a lot could be done.”

The problem with reforms is that they can only circumvent the problem of the veto, which is at the heart of the current crisis and the United Nations’ historical challenges.

Still, Mona Juul, Norway’s ambassador to the United Nations, believes that diplomats can’t just sit there powerlessly and watch the situation unfold. Norway is currently a nonpermanent member of the Security Council.

“Public attention, scrutiny and expectations of the U.N. are high right now. And we need to make sure we are matching this,” she said. “We need to use all of our available tools to ensure it is fulfilling its role in the eyes of our primary constituency: we the people.”

As the war continues to ravage his country, Kyslytsya highlights the conflict’s consequences for the entire world.

“It’s a genuine threat to 90 percent of members of the international community, and it is a transversal threat. That is the kind of threat that is present and mainstreamed in all aspects of our life, for security economy, trade, everything,” he told The Asahi Shimbun.

As such, he hopes the conflict will not become a frozen, recurring item discussed on the Security Council, like it has for the conflicts in Yemen and Syria.

(This article was written by Stephanie Fillion and Gakushi Fujiwara.)