Survey: 41% in Japan OK with Okinawa bearing U.S. base burden 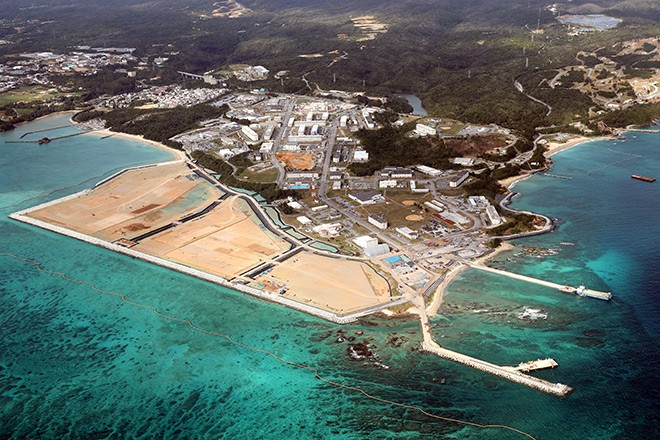 A wide gap exists between Okinawa Prefecture and the rest of Japan on whether the southern island prefecture should continue to host the bulk of U.S. military bases in Japan, surveys showed.

Sixty-one percent of Okinawa residents said the U.S. military presence in the prefecture should be decreased, while 19 percent said they were fine with the bases remaining the way they are, according to a prefecture-wide survey jointly conducted by The Asahi Shimbun, The Okinawa Times and Ryukyu Asahi Broadcasting Corp. in March and April.

But in a nationwide survey conducted around the same time, 46 percent of respondents said the U.S. bases in Okinawa should be decreased, while 41 percent said they were OK with the situation in the prefecture.

Both surveys noted that around 70 percent of all U.S. military bases and facilities in Japan are currently located in Okinawa Prefecture.

The Okinawa survey was conducted ahead of the 50th anniversary of Okinawa’s reversion to Japan in May. Questionnaires were mailed to 2,000 randomly selected voters, and 61 percent, or 1,218, gave valid responses.

The nationwide survey was conducted on constitutional themes. Questionnaires were mailed to 3,000 people, and 63 percent, or 1,892, gave valid responses.

Thirty-nine percent in both the Okinawa and nationwide surveys said the Japanese government’s consideration for the U.S. side was the main reason U.S. military facilities have not been reduced in the prefecture.

Thirty-two percent in Okinawa Prefecture and 36 percent nationwide said the U.S. bases have not been reduced mainly because they “are necessary for the security of both Japan and the United States.”

In telephone surveys in 2015 and 2019, around 53 percent in the prefecture said the bases were “very much” or “to a certain degree” necessary for Japan’s security.

The latest Okinawan survey for the first time asked respondents if they “feel uneasy” about the possibility that their prefecture could become involved in an armed conflict between the United States and China over Taiwan.

For 31 percent of Okinawa residents, the biggest issue Japan faces with China is “a territorial dispute,” while 27 percent cited China’s large-scale military buildup.

Fifty-four percent in the Okinawa survey opposed the relocation of the U.S. Marine Corps Air Station Futenma in the prefecture to the Henoko area of Nago, also in the prefecture, while 33 percent supported the plan.

In the nationwide survey, 33 percent opposed the relocation plan, while 33 percent supported it. Thirty-four percent chose “other” or did not provide an answer.

In the Okinawa survey, 58 percent supported the continuation of the Japan-U.S. Security Treaty, while 26 percent were against it.

But in the nationwide survey, 82 percent supported the treaty and only 10 percent opposed it.