Tamaki urges Kishida to find another fix for Henoko issue 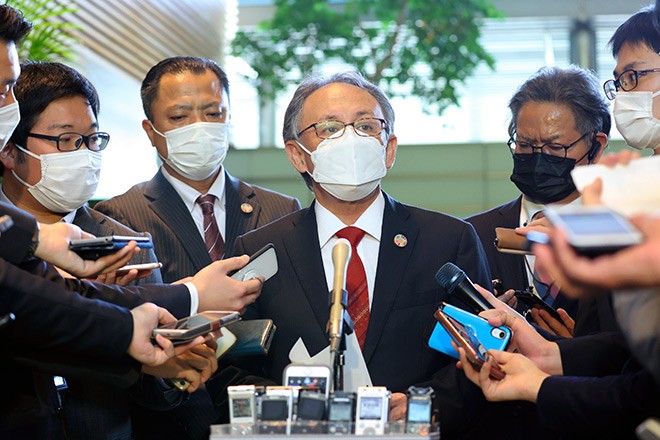 Okinawa Governor Denny Tamaki speaks to reporters outside the prime minister’s office in Tokyo on May 10 just after submitting his proposals for the southern prefecture to Prime Minister Fumio Kishida. (Koichi Ueda)

Okinawa Governor Denny Tamaki tried to amp up the pressure on the prime minister at a meeting on May 10 to find another solution to the controversial relocation of a U.S. military base.

Tamaki met with Prime Minister Fumio Kishida at the prime minister’s office in Tokyo and handed him a political document titled “New proposals to achieve a peaceful and prosperous Okinawa,” which lays out a vision for the future of the southern prefecture.

The move coincides with the 50th anniversary of Okinawa’s return to Japanese sovereignty on May 15.

The set of proposals demands a swift solution to the government’s contentious plan to relocate the U.S. Marine Corps Air Station Futenma in Ginowan to the Henoko district of Nago, both of which are in Okinawa Prefecture. The document calls it a “structural and discriminatory” issue.

“I would like to take (the proposals) seriously as the government,” Kishida said. “I will also continue my effort to reduce the burden (on Okinawa Prefecture) of hosting U.S. military bases.”

According to the Okinawa prefectural government, the meeting between Tamaki and Kishida took place behind closed doors and lasted 13 minutes.

On the Henoko base relocation issue, Tamaki told Kishida in the meeting that he would like to explore ways of finding a solution through dialogue.

Kishida’s reply was measured and brief.

“I would like to communicate with the Okinawan people to mutually recognize and understand each other’s views, and to read the proposals sincerely,” he said.

Handing the prime minister the set of proposals is a symbolic move that echoes a similar event from the island’s past.

Just before the prefecture was returned to Japanese sovereignty in 1972, the then government of the Ryukyu Islands put together its proposals for the Japanese government.

After the meeting with Kishida, Tamaki explained his motivation to reporters.

“Now we mark the 50th anniversary of Okinawa’s return to Japan and we needed to communicate to the government how we think we can inherit the original proposals for the future,” he said. “I hope the government will once again fully recognize Okinawans’ views.”

“We would like to continue to promote Okinawa’s development, as well as reduce the burden of U.S. military bases there, so that the prefecture will prosper further,” he said at a news conference after the meeting.

On the relocation of the U.S. military base, Matsuno repeated the government’s stance that “Henoko is the only place” it can be relocated to.

He rejected the possibility of overhauling the Japan-U.S. Status of Forces Agreement (SOFA), one of the demands contained in Tamaki’s proposals.

(This article was written by Shogo Mitsuzumi and Keishi Nishimura.)