Yoon: I want to work with Kishida to improve ties 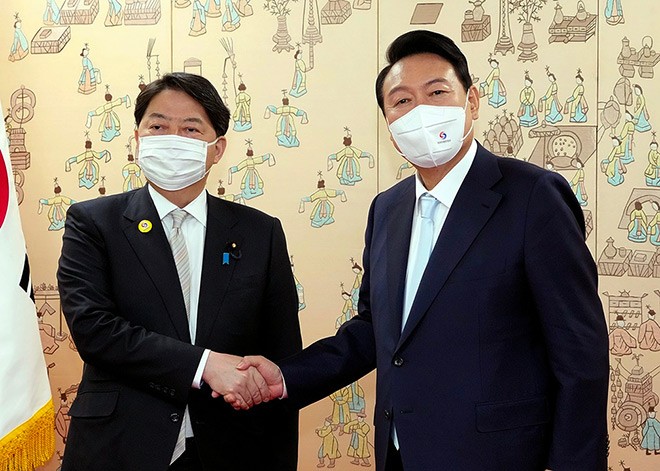 Just hours after he was inaugurated on May 10, the new president met with Japanese Foreign Minister Yoshimasa Hayashi and told him, “I want to work together with Prime Minister (Fumio) Kishida to improve relations between South Korea and Japan.”

Hayashi, who attended the inauguration ceremony as the special envoy of Kishida, handed Yoon a letter from the Japanese prime minister during the meeting.

In his letter, Kishida said there is no time like the present for strategic cooperation between Japan and South Korea as well as with the United States, now that the current rules-based international order is being threatened.

Yoon told Hayashi that he held expectations for an early meeting with Kishida.

Yoon indicated during the South Korean presidential campaign that he would work toward improving ties with Japan. He even criticized his predecessor, Moon Jae-in, for using historical issues between South Korea and Japan for political purposes.

According to Foreign Ministry sources, Kishida felt betrayed by Moon after his administration effectively turned the 2015 agreement on the former comfort women between Japan and South Korea into a dead letter.

Kishida was foreign minister at the time the agreement was reached to set up a fund to support the South Korean women who were forced to provide sex to Japanese military personnel before and during World War II.

But it remains unclear how much progress Yoon can make in improving bilateral ties, given his support ratings are under 50 percent while the opposition controls a majority of the South Korean National Assembly.

Japanese officials have indicated that if that line is crossed, there would be no way to turn around the bilateral relationship.

But the Yoon administration will also have to consider domestic public opinion in implementing any measure that would avoid that worst-case scenario. One option being considered is to have Seoul shoulder the compensation amount.

With South Korea scheduled to hold unified local elections in June and with an Upper House election looming in Japan in July, officials of the two governments will not likely take decisive action on the historical issues because of the possible negative ramifications domestically.

One aide to Yoon said the South Korean administration would likely only work to resolve the historical issues after the Upper House election.

(This article was written by Ryo Aibara and Takuya Suzuki.)