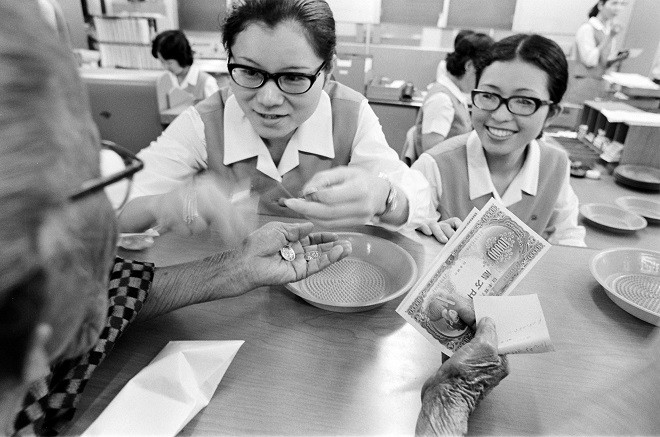 Mikiko Yamanoha, left, exchanges the U.S. dollar into the yen as a clerk at the Bank of the Ryukyus Matsuo Branch in Naha, Okinawa Prefecture, on May 15, 1972, the day the southern prefecture returned to Japanese sovereignty. (Asahi Shimbun file photo)

NAHA--In a photo from a historic day 50 years ago, an elderly woman is holding in her suntanned hand a new 10,000-yen bill with a portrait of Prince Shotoku printed on it.

In the image, smiling Mikiko Yamanoha, a clerk with the Bank of the Ryukyus Matsuo Branch in the capital of Okinawa Prefecture, is handing change to the woman.

Yamanoha, now 75, remembers the memorable day when Okinawa returned to Japanese sovereignty and the currency in use there was switched from the U.S. dollar to the Japanese yen.

“It had been raining from the morning,” Yamanoha said. “I think I went to work that day in a short rainproof cloak and under an umbrella.”

The street is currently a famed tourist spot, but Yamanoha said the district around it had a more local feel at the time, with department stores, a hospital, eateries and other establishments lining the street.

Yamanoha said she engaged in no routine bank duties that day and instead devoted herself to exchanging U.S. dollars, which customers brought in with them, for Japanese yen.

CHANGE OF CURRENCY YEARS IN THE MAKING

An independent currency, a military scrip called the B-yen, was used for some time before it was replaced by the U.S. dollar in 1958.

“Okinawa is the only part of Japan where people ever experienced so many changes in the money system during their lifetime, and people of my generation are probably the only ones who went through all that,” Yamanoha said.

A decision on returning Okinawa to Japanese sovereignty was made about a decade after the dollar came into use, whereupon preparations began for yet another currency switch, this time to the Japanese yen.

That was a big project, which involved using vessels of Japan’s Self-Defense Forces to carry 54 billion yen in cash from mainland Japan to Okinawa.

No sooner had the Matsuo Branch been opened on May 15, 1972, the day the currency exchange began, than customers formed two and three lines there. And Yamanoha was also there, handling yen bills.

“All dollar bills are the same size, but yen bills come in different sizes,” she said. “I remember thinking at the time that the yen bills are more of a nuisance for a bank clerk like myself because it took more effort to line up their edges.”

That was, however, not the first time that Yamanoha had ever held the yen in her hands.

She had made the rounds of Kyushu and Honshu for about 20 days during her high school class trip in the summer of 1964. Okinawans needed passports to travel to mainland Japan at the time.

“I asked myself why I needed my passport in spite that I was a Japanese compatriot,” Yamanoha said. “But when I asked myself if I was an American, I realized that, no, I was speaking Japanese. I thought of myself as somebody really not this one, but not the other one, either.”

“That will allow me to represent myself confidently as a Japanese and go anywhere I want to go,” she said she thought at the time.

She continued working for the Bank of the Ryukyus following the reversion to Japanese sovereignty and did so until she was 64, including a stint as an employee on loan elsewhere. She saved money in yen, which she used to travel both in Japan and abroad.

Yamanoha currently serves as a volunteer staff member at the Okinawa Prefectural Museum and Art Museum in Naha.

On exhibit there is a check issued when the dollar was exchanged into the yen. She said the exhibit reminds her of the days she was pressed for time exchanging currencies for customers at her bank.