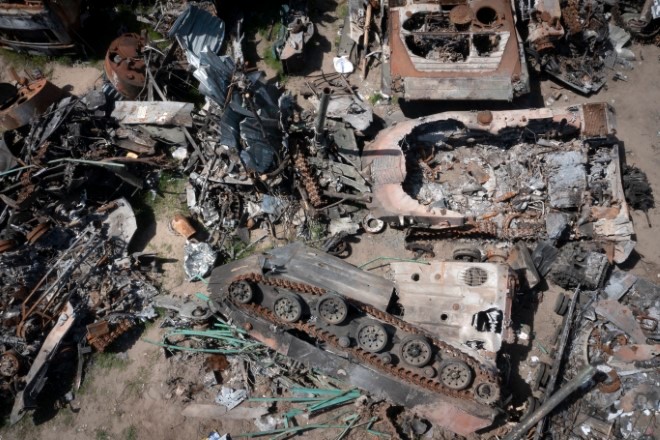 Destroyed Russian military vehicles lie in a garbage dump in Bucha, on the outskirts of Kyiv, Ukraine, May 10, 2022. (AP Photo)

ZAPORIZHZHIA, Ukraine--Ukraine’s natural gas pipeline operator said Wednesday it would stop Russian shipments through a key hub in the east of the country, while its president, Volodymyr Zelenskyy, said Kyiv’s military had made small gains, pushing Russian forces out of four villages near Kharkiv.

The pipeline operator said Russian shipments through its Novopskov hub, in an area controlled by Moscow-backed separatists, would be cut beginning Wednesday. It said the hub handles about a third of Russian gas passing through Ukraine to Western Europe. Russia’s state-owned natural gas giant Gazprom put the figure at about a quarter.

The operator said it was stopping the flow because of interference from “occupying forces,” including the apparent siphoning of gas. Russia could reroute shipments through Sudzha, a main hub in a northern part of the country controlled by Ukraine, it said. But Gazprom spokesperson Sergei Kupriyanov said that would be “technologically impossible” and questioned the reason given for the stoppage.

Zelenskyy said Tuesday that the military was gradually pushing Russian troops away from Kharkiv, while Foreign Minister Dmytro Kuleba voiced what appeared to be increasing confidence--and expanded goals, suggesting Ukraine could go beyond just forcing Russia back to areas it held before the invasion began 11 weeks ago.

Kuleba told the Financial Times that Ukraine initially believed victory would be the withdrawal of Russian troops to positions they occupied before the Feb. 24 invasion. But the focus shifted to the eastern industrial heartland of the Donbas after Russian forces failed to take Kyiv early in the war.

“Now if we are strong enough on the military front, and we win the battle for Donbas, which will be crucial for the following dynamics of the war, of course the victory for us in this war will be the liberation of the rest of our territories,” Kuleba said.

Kuleba’s statement seemed to reflect political ambitions more than battlefield realities: Russian forces have made advances in the Donbas and control more of it than they did before the war began. But it highlights how Ukraine has stymied a larger, better-armed Russian military, surprising many who had anticipated a much quicker end to the conflict.

Ukraine said Tuesday that Russian forces fired seven missiles at Odesa a day earlier, hitting a shopping center and a warehouse in the country’s largest port. One person was killed and five wounded, the military said.

Images showed a burning building and debris--including a tennis shoe--in a heap of destruction in the city on the Black Sea.

One general has suggested Moscow’s aims include cutting Ukraine’s maritime access to both the Black and Azov seas. That would also give Russia a corridor linking it to both the Crimean Peninsula, which it seized in 2014, and Transnistria, a pro-Moscow region of Moldova.

Ukraine’s targeting of Russian forces on Snake Island in the Black Sea was helping disrupt Moscow’s attempts to expand its influence, the British military said.

Russia has sought to reinforce its garrison on Snake Island, while “Ukraine has successfully struck Russian air defenses and resupply vessels with Bayraktar drones,” the British Defense Ministry said in an intelligence update on Twitter. It said Russian resupply vessels had minimum protection after the Russian Navy retreated to Crimea after losing the Moskva.

That corresponds to satellite photos analyzed by The Associated Press showing the fighting there.

But the British military warned: “If Russia consolidates its position on (Snake) Island with strategic air defense and coastal defense cruise missiles, they could dominate the northwestern Black Sea.”

Even if Russia fails to sever Ukraine from its coast--and it appears to lack the forces to do so--continuing missile strikes on Odesa reflect its strategic importance. The Russian military has repeatedly targeted its airport, claiming it destroyed several batches of Western weapons.

To protect Odesa, Kyiv might need to shift forces to the southwest, drawing them away from the eastern front in the Donbas, where they are fighting near Kharkiv to push the Russians back across the border.

Kharkiv and its surroundings have been under sustained Russian attack since the early in the war. In recent weeks, grisly pictures testified to the horrors of those battles, with charred and mangled bodies strewn in one street.

The bodies of 44 civilians were found in the rubble of a five-story building that collapsed in March in Izyum, about 120 kilometer from Kharkiv, Oleh Synehubov, head of the regional administration, said Tuesday.

Russian aircraft twice launched unguided missiles Tuesday at the Sumy area northeast of Kharkiv, according to the Ukrainian border guard service. The region’s governor said the missiles hit several residential buildings, but no one was killed. Russian mortars hit the Chernihiv region, along the Ukrainian border with Belarus, but there was no word on casualties.

Zelenskyy used his nightly address to pay tribute to Leonid Kravchuk, the first president of an independent Ukraine, who died Tuesday at 88.

Kravchuk showed courage and knew how to get the country to listen to him, he said.

That was particularly important in “crisis moments, when the future of the whole country may depend on the courage of one man,” said Zelenskyy, whose own communication skills and decision to remain in Kyiv when it came under Russian attack helped make him a strong wartime leader.