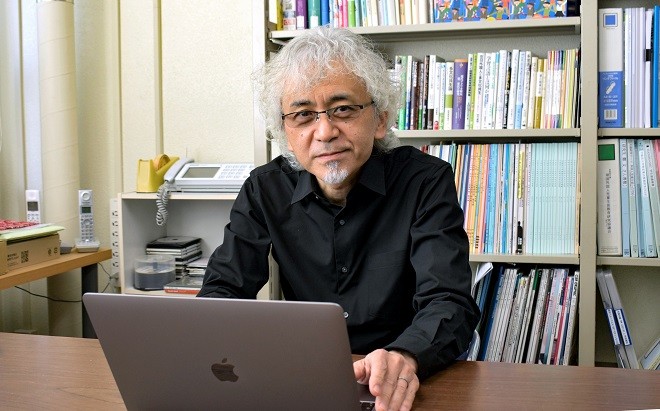 UTSUNOMIYA--The E-Tra Note, a multilingual online school memo system, is being touted as both simple to use and accurate.

“I wish to turn ‘special’ into part of the ‘ordinary,’” said Hideki Wakabayashi, 59, the developer of the E-Tra Note. “I hope teachers will face non-Japanese children and their households without using the language barrier as an excuse. I wish to eliminate any language barriers through information technology.”

The system allows teachers to choose from a library of more than 600 fixed phrases and other text elements, combine them and send them out so the parents and other guardians of students can receive messages in nine languages, including English and Chinese.

Unlike interpreting apps, the product can be used irrespective of the time and location. It was put to practical use in April.

“I hope this system will help reduce teachers' workloads by linking students' guardians with their schools,” Wakabayashi said.

Wakabayashi became an English teacher at a junior high school in his native Tochigi Prefecture after graduating from university. Half a year of studying Spanish in his 11th year became a turning point of his career, however, after which he was assigned to take charge of non-Japanese students.

On one occasion, Wakabayashi visited the home of a Brazilian boy who used to be noisy during school hours. He talked to the boy’s mother in broken Portuguese with a dictionary in hand, and the boy was calmer in class from the following day.

The experience gave Wakabayashi a sense of confidence that he had won their trust. It also brought home how important it was to cooperate with the parents and other guardians.

There were an increasing number of non-Japanese citizens in town at the time, giving him a firsthand sense that a big wave was coming. It also lit a fire within him.

Wakabayashi became involved in a research project on the education of non-Japanese children and changed jobs, when he was 47, to serve as a project associate professor with Utsunomiya University.

“I thought (the job change) would allow me to pursue what I wanted to do,” he said.

“I had no hesitation about it.”