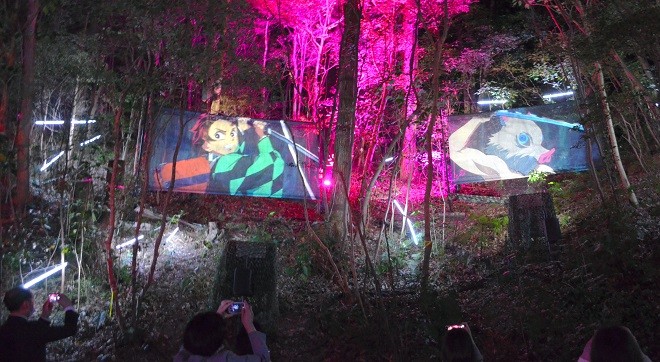 A scene from a night-time event themed on “Demon Slayer: Kimetsu no Yaiba” held at the Nijigen no Mori park in Awaji, Hyogo Prefecture (Naoyuki Mori)

AWAJI, Hyogo Prefecture--A “Demon Slayer: Kimetsu no Yaiba” collaboration attraction has opened in the Hyogo Prefectural Awaji Island Anime Park “Nijigen no Mori,” where visitors can immerse themselves in the world of the massively popular anime “Demon Slayer.”

Running until Sept. 30, the attraction features two installments, one held in the evening and the other during the day.

The “Natagumo Mountain Night Walk” uses projection mapping imagery displayed on rocks and the ground, as well as light and sound effects, to recreate the battle fought by protagonist Tanjiro Kamado and other characters against "oni" demons.

Participants use wooden tags to keep records of the fight as they navigate the 1.2-kilometer-long route through the forest after dark.

“The Falling Flower Village and Scene of Illusions Mystery Walk” is a daytime event that allows visitors to stroll through the park installed with character panels while they solve puzzles.

Original merchandise and food items made in collaboration with “Demon Slayer” are also available at the venue.

“We want people to enjoy the world of the anime, which has a large fanbase ranging from children to adults, in the great outdoors,” a representative said.

The Nijigen no Mori park opened in 2017 and will mark its fifth anniversary in July.

“More than anything, we want to thank the residents of Awajishima island,” said Yasuyuki Nambu, head of Pasona Group Inc. that operates the park. “We want to start business ventures here to lay the groundwork for a new industry.”