‘Long COVID’ patients struggle to keep up at work, school 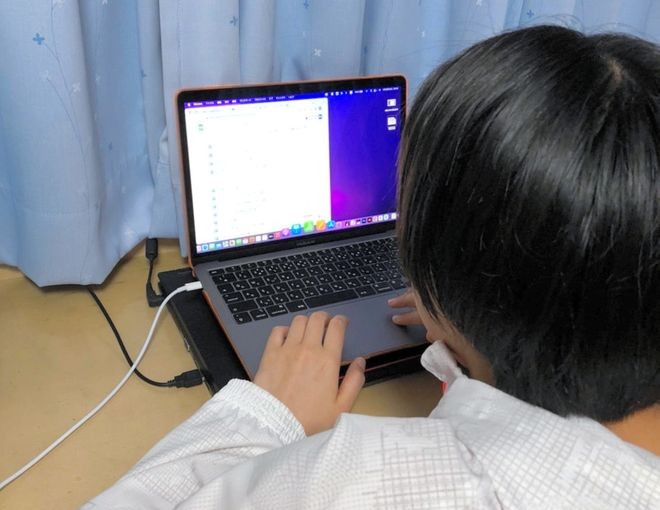 A high school girl, forced to change schools because she got long COVID, works on a classroom assignment at her computer. (Provided by the student)

A second-year high school student in Kanagawa Prefecture who became infected with the novel coronavirus in April last year now feels her pulse race whenever she stands up.

It nearly causes her to fall over.

The 16-year-old suffers a strong sense of fatigue after physical activities. It is so severe that she often cannot get out of bed.

One year has passed since she became infected with the virus, but she has found herself unable to rebound.

“Why do I have such terrible symptoms?” the student said in exasperation.

When she was first diagnosed with COVID-19, she only had mild symptoms. But about two weeks later, she began to feel drained all the time and she started getting headaches.

The symptoms hit right around the time she started going back to school. She only had enough energy to take a few classes.

She visited the St. Marianna University Hospital in Kawasaki, and doctors told her she was suffering from postural orthostatic tachycardia syndrome, which affects a person’s blood circulation due to imbalance in the autonomic nerve system.

This made it impossible for her to continue her school club activities. She was forced to give up on getting into her first-choice college on a sports referral, and moved to a correspondence high school in April this year.

She is one of the many people suffering from the aftereffects of COVID-19 long after they became infected. Many like her now find it difficult to continue working at their offices or attending classes in school.

And there are growing concerns that far more people will get “long COVID,” as it is known around the world, because a higher percentage of young people contracted the coronavirus during the sixth wave of infections that began in January.

A 44-year-old construction contractor in Kyoto Prefecture caught the virus in August last year and was hospitalized for two weeks. But he has suffered since then from aftereffects.

His doctor said he had remained unconscious in critical condition for three days.

Shortly after he was discharged from the hospital, he went back to work, but for about three months, he felt drained of energy and experienced trouble breathing. Concentrating on tasks at work became difficult, as his mind would often focus on irrelevant matters.

“I thought this was not how it had been supposed to be,” he said. “The aftereffects linger longer than expected. The impact of the coronavirus should not be underestimated.”

Dr. Koichi Hirahata, director of the Hirahata Clinic in Tokyo’s Shibuya Ward, said an increasing number of young people, particularly junior and senior high schoolers, started showing up at his hospital following the rapid spread of the Omicron variant in January this year.

The Hirahata Clinic opened a separate section for outpatients with long COVID two years ago. It has examined 4,000 people there so far.

According to Hirahata, many of his patients must “rest for more than half the week because of serious aftereffects,” and people from younger generations make up a considerable part of the total.

The World Health Organization defines long COVID, or “post COVID-19 condition,” as COVID symptoms that remain for at least two months independent of other diseases.

The symptoms can develop even after three months following their infections.

A cognitive disorder known as “brain fog,” which is associated with having low energy and feeling groggy, makes it harder for people to concentrate.

“It (brain fog) emerges more frequently in patients hit by a severer sense of fatigue at the time of infection,” said Tomoya Tsuchida, a physician at St. Marianna University Hospital.

Just how the aftereffects arise is unclear. Possible causes include a progression of inflammation due to impaired immune regulation and vascular trauma linked to thrombosis, but little is known about the source of the problems.

The health ministry in April released the official version of its guidelines to show doctors how to manage patients with long COVID based on research reports from both in and outside Japan.

Nobuhiko Okabe, head of Kawasaki city’s health and safety research institute, sits on the committee that made the guidelines.

“It is difficult as of now to present a clear treatment policy for aftereffects,” Okabe said. “If one suffers from conditions that can interfere with daily life, they should share their difficulties with their doctors instead of agonizing over the issues alone.”

There are no established therapeutic methods for treating long COVID and it can be difficult to tell how long the symptoms will last.

In some cases, long COVID has made people’s jobs practically impossible to carry out.

Hirahata said 67 percent of the patients he saw from November 2020 through April this year said their infections negatively influenced their work. As many as 41 percent took days off, and 7 percent had to leave their jobs.

The findings of a survey conducted by Kobe city revealed that a lot of patients with long COVID have difficulty getting those around them to understand their health conditions at work and elsewhere, leaving them to deal with the problems all on their own.

The study, conducted between December last year and January this year, reached out to those affected by the virus during the fourth wave of infections in spring 2021.

Of all 1,608 valid responses, 771 said they “have experienced or are experiencing” aftereffects.

Nearly 20 percent said they were still bothered by coughing. The city has also received many consultations about the symptoms.

One patient said people “at my workplace are worried about continuing coughs even after I returned to work,” while another described it as “painful to hear inconsiderate words spit at me when I cough.”

“The discovery illustrates the difficulties patients are facing in winning the understanding of people around them,” said a Kobe municipal official. “We will foster measures to raise awareness among businesses and provide mental health care.”

(This article was written by Natsumi Adachi, Kengo Ichihara and Hiromi Kumai.)