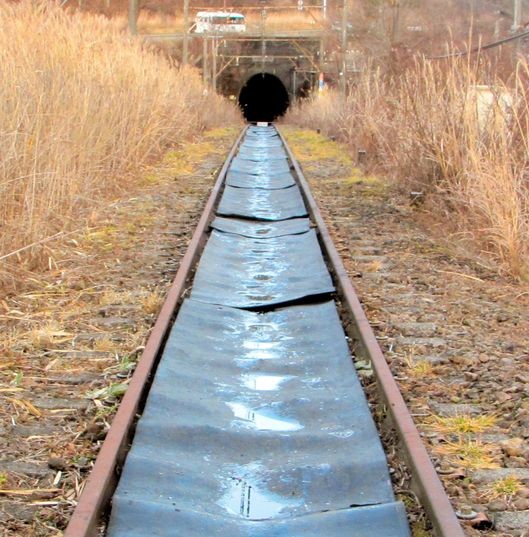 Rubber mats are placed on the track of the disused Shinetsu Line to allow evacuees to flee with ease to the safety of tunnels in the event of an emergency. (Provided by Karuizawa town)

KARUIZAWA, Nagano Prefecture--Karuizawa, one of the oldest and most famous summer resorts in Japan, is taking no chances when it comes to ensuring visitors and tourists remain safe--even in the unlikeliest of circumstances.

Authorities designated 40 evacuation sites, including tunnels on a disused railway, a hotel, a museum and a college-owned resort facility, in case of an enemy invasion or a volcanic eruption of Mount Asamayama.

“A small or midsize eruption could occur anytime,” noted Karuizawa Mayor Susumu Fujimaki at a news conference. “It is our administrative responsibility to prepare for such emergency contingencies.”

“Contrary to all expectations, Russia invaded Ukraine, resulting in many civilian deaths,” Fujimaki said, suggesting there is always a possibility that Japan one day will be involved in a military conflict.

Situated 1 kilometer east of JR Karuizawa Station, the tunnels along the former Shinetsu Line are situated on the border between Nagano and Gunma prefectures. Each running at 400 meters in length, the two tunnels were used for inbound and outbound runs.

While Annaka city in Gunma Prefecture is responsible for maintaining the structures, an agreement was reached in August 2017 to allow Karuizawa to use the tunnels as shelters in an emergency.

Karuizawa town authorities estimate that 2,600 people would use them.

Starting in May, Karuizawa also chose mainly private facilities as evacuation centers after their owners agreed to the request.

The shelters are listed on the town’s website. A precondition was that the facilities are built with reinforced concrete and have a minimum interior space of 1,000 square meters.

“Our town has no underground facilities to escape to, so it is important to secure heavy-duty buildings,” Fujimaki said.

Unlike shelters set up in public facilities, the newly designated sites are not intended for prolonged use.

Food and other relief goods will not be stocked at the tentative shelters.