Damage from war in Ukraine equal to half of its GDP 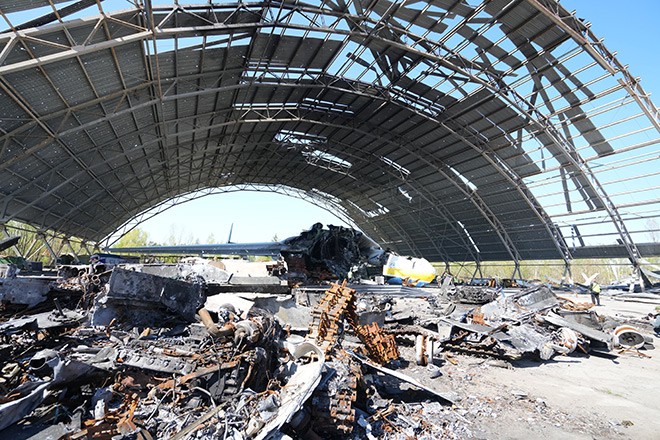 A heavily damaged airport on the outskirts of Kyiv (Takuya Isayama)

Russia’s invasion of Ukraine has left the country’s economy in ruins with damage to infrastructure estimated at roughly half of its gross domestic product, according to Kyrylo Shevchenko, the governor of the National Bank of Ukraine (NBU).

“The economic losses are tremendous,” Shevchenko said in an online interview with The Asahi Shimbun.

He said the NBU assessed physical damage to Ukrainian infrastructure at $100 billion yen (about 13 trillion yen) since the Feb. 24 invasion began.

The United Nations has estimated that about 12 million people out of a population of roughly 44 million have been displaced either domestically or fled to other nations.

Shevchenko said Ukraine could not rebuild based only on reserve domestic funds.

He estimated that its GDP in 2022 “could drop at least by one-third.”

On the other hand, Shevchenko said banks and companies are proving resilient in the face of Russia’s military aggression. In this respect, he said that 78 percent of the branches of domestic banks had reopened.

A survey by the NBU of around 20,000 companies in Ukraine in early March, days after the invasion began, found that 32 percent had suspended operations. But by late April that figure had decreased to 17 percent.

Calling the results “positive signals,” he said the NBU was “quite optimistic.” At the same time, he added, “We want to see how the military hostilities will develop.”

The Ukrainian government has said it would face a revenue shortfall of about $5 billion (about 650 billion yen) a month in the short-term.

The NBU set up a special account immediately after the Russian invasion for donations to support the Ukrainian war effort.

“We have already raised more than $500 million (about 65 billion yen), and it was already transferred for the needs of the military,” he said.

(This article was written by Koji Nishimura in Singapore and Shinya Wake in London.)