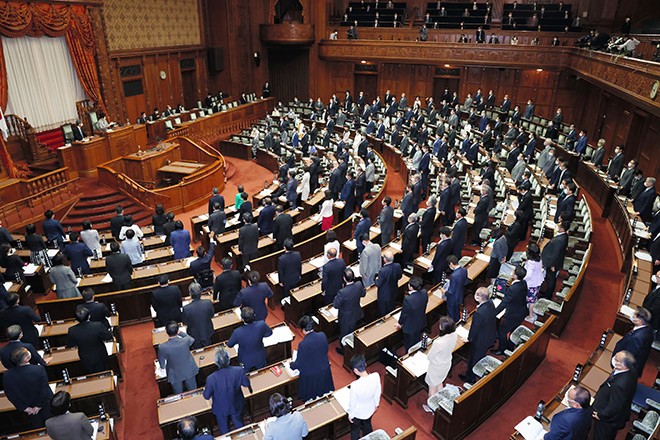 Legislation that greatly increases government oversight over advanced technologies was passed in the Upper House on May 11. (Koichi Ueda)

Businesses are scurrying to prepare for new economic security measures that raise government oversight over a host of private-sector activities and could disrupt their normal operations.

But one major problem lies in their way: The government has not told them what all the new rules will be, specifically.

The new legislation, enacted on May 11, has many firms nervous about whether they will run afoul of the law or fail to qualify for generous subsidies, given that many of the details remain undecided at this stage.

“Frankly speaking, we are anxious because we do not have a clear idea of how it will affect our business activities,” said a company employee who attended a seminar for corporate customers on the legislation in Tokyo on May 9.

The new sections of the law allow increased government oversight across broad areas, from strengthening supply chains for key parts and materials to companies installing vital equipment and computer systems in core infrastructure to guard against cyberattacks.

But with the specifics yet to be fleshed out, many are now tearing their hair out as they scramble to stay ahead of the game--or at least not get left behind.

Some companies have set up sections dedicated to handling issues that may arise from the new legislation, as their product exports or suppliers of their raw materials could be subject to change due to the shifting economic security environment in and outside of Japan.

Mitsubishi Electric Corp., which is involved in the business of defense equipment, established a section focused on the law in October 2020.

Ten or so employees at the section gather information on the import and export regulations of each country to analyze how they could affect Mitsubishi Electric’s products.

Other leading companies, such as Panasonic Corp., Fujitsu Ltd. and Ricoh Ltd. are taking similar actions.

But the law leaves little in the way of hints for them. Cabinet and ministerial orders to be issued at a later date will draw up the specifics of 138 sections of the legislation.

“We remain unclear about what we ought to do” to prepare for the law’s enforcement, an official with a manufacturer lamented.

As businesses appear to be at the whim of the government, major companies are now turning to board members who formerly served in the government to play a key role as liaisons.

Mitsubishi Electric, Fujitsu and NEC Corp. all have former bureaucrats on their boards.

Satoshi Kusakabe, former chief of the Agency for Natural Resources and Energy, is now in charge of government and external relations, risk management and economic security as executive officer of Mitsubishi Electric. He said a business needs personnel well versed in the inner workings of the government to appropriately respond to the law.

“It is impossible for a company to draw up a policy to manage risks in economic security unless it has perspectives from businesses, government and investors,” Kusakabe said. “What kind of personnel will staff its team handling economic security is a question relating to the company’s management strategy.”

Yoshihito Takahashi, professor of business management at Senshu University, said companies want former government officials who are now in top-level management to help them avoid potential land mines. And the pressure is on.

“Those executives who landed jobs in the private sector are expected to talk with the government so that their employers will not be targeted by unreasonable regulations,” he said.

For some at least, the stakes are high.

The economic security law comes with not only penalties for violators, but with subsidies for an industry dealing with key materials.

Manufacturers of storage batteries, which are essential to electric vehicles and in the expansion of the use of renewable energies, have raised their hopes of acquiring the subsidies to help bolster their competitiveness.

They have been fighting cutthroat battles with Chinese rivals, which are heavily subsidized by the state, and South Korean companies.

An official with a leading carmaker hailed the provision of government aid in that sector.

“The government support is indispensable when Japanese companies are vying with their Chinese counterparts that have full backing from the state,” the official said.

(This article was written by Takumi Wakai and Susumu Imaizumi.)