Experts: BA.2 responsible for 96% of infections across Japan 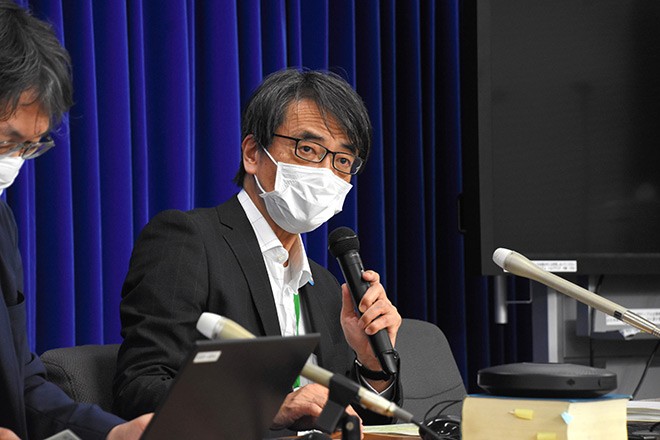 Takaji Wakita, head of the National Institute of Infectious Diseases who chairs a panel of experts advising the health ministry, speaks at a news conference on May 11. (Kai Ichino)

The highly contagious BA.2 Omicron subvariant has become the dominant strain in Japan, accounting for 96 percent of new COVID-19 cases as of May 4, according to an expert panel.

The estimated figure was presented at a May 11 meeting of a panel of experts advising the health ministry.

The panel also reported that new COVID-19 cases nationwide over the week through May 10 were 98 percent of the figure for the preceding week.

The tally increased from a week earlier in 25 prefectures, but the national figure remained almost flat as the count continued trending downward in the three major metropolitan areas of Tokyo, Osaka and Nagoya.

The panel pointed out the difficulty of assessing the latest infection situation, given many medical institutions closed and fewer COVID-19 tests were conducted during the Golden Week holiday period, which ended on May 8.

Nighttime foot traffic in Tokyo’s downtown areas doubled from last year’s Golden Week, according to data presented at the meeting.

Takaji Wakita, head of the National Institute of Infectious Diseases who chairs the panel, called for a need to closely monitor the spread of the virus for a week or two as experts expect new cases to rise further from the coming week.

Wakita also spoke about his views on mask wearing at a news conference after the meeting.

“I don’t see a need to put on masks when people are outdoors and practice social distancing without talking to each other,” he said.

But he once again urged the public to wear one when they are indoors and need to converse with others to lower the risk of infections.

(This article was written by Kai Ichino and Yuki Edamatsu.)