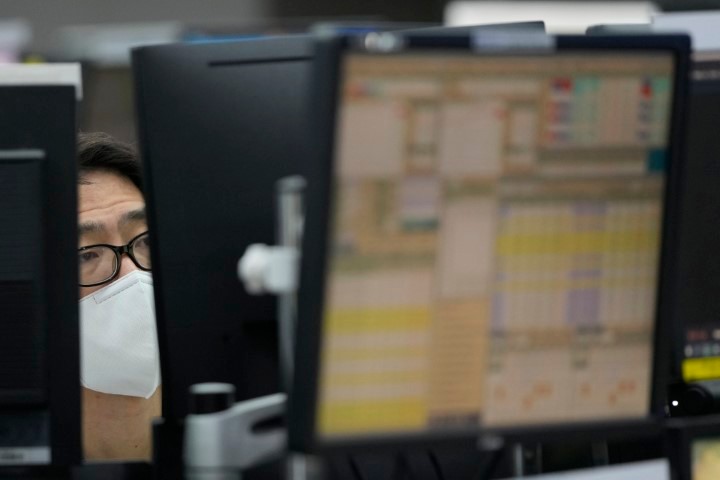 A currency trader watches monitors at the foreign exchange dealing room of the KEB Hana Bank headquarters in Seoul on May 12.(AP Photo)

Shares fell in Asia on Thursday after the release of worse inflation data than expected sparked heavy selling of technology stocks on Wall Street.

The arrests of Cardinal Joseph Zen, singer Denise Ho and others followed the choice last weekend of a hard-line chief executive for the semi-autonomous Chinese territory, where Beijing has been tightening controls.

More broadly, markets are focused on inflation as central banks wind down support for economies that was rolled out during the pandemic. The U.S. Federal Reserve, for example, has flipped aggressively toward raising interest rates after seeing high inflation last longer than it expected.

Wednesday’s report from the U.S. Labor Department showed inflation slowed a touch in April, down to 8.3 percent from 8.5 percent in March. Investors also found some glass-half-full signals in the data suggesting the consumer price index, or CPI, may be peaking and set to ease further, but the numbers were still higher than economists forecast.

“The consensus is that inflation has peaked, at least in the US. A floor for global equity markets depends on how quickly US CPI inflation falls,” Stephen Innes of SPI Asset Management said in a commentary.

Producer prices are due later Thursday.

On Wednesday, an early rally faded, leaving the S&P 500 1.6 percent lower at 3,935.18. That wiped out gains from a day before, when the benchmark index snapped a three-day losing streak.

The Dow Jones Industrial Average dropped 1 percent to 31,834.11. The Nasdaq fell 3.2 percent to 11,364.24 as tech stocks weighed down the broader market. The three major indexes are each on pace for another sharp weekly loss.

Economists said the inflation report will keep the Fed on track for rapid and potentially sharp increases in interest rates in upcoming months, though the data led to erratic trading on Wall Street.

Treasury yields initially jumped but pared their gains as the morning progressed. The 10-year Treasury yield climbed as high as 3.08 percent overnight but fell back to 2.90 percent early Thursday.

To corral high inflation, the Fed has already pulled its key short-term interest rate off its record low near zero, where it spent most of the pandemic. It also said it may continue to hike rates by double the usual amount at upcoming meetings.

Such moves are designed to slow the economy to help quash inflation, but the Fed risks causing a recession if it raises rates too high or too quickly. Higher rates tend to pull prices for stocks and all kinds of investments lower in the meantime. Higher-yielding, safe Treasury bonds, for example, become more attractive to investors.

Higher rates make big technology companies, other high-growth stocks and even cryptocurrencies relatively less appealing. The Nasdaq’s loss of more than 27 percent so far this year is considerably worse than the roughly 17 percent drop for the S&P 500, for example.

Apart from interest rates, in China, shutdowns meant to stem COVID are raising the risk of more supply chain disruptions for global companies and a slowdown in the world’s second-largest economy.

The war in Ukraine, meanwhile, is threatening to keep inflation high because of disruptions to the oil and natural gas markets.

Benchmark U.S. oil dropped $2.04 to $103.67 per barrel in electronic trading on the New York Mercantile Exchange. It gained 6 percent on Wednesday.