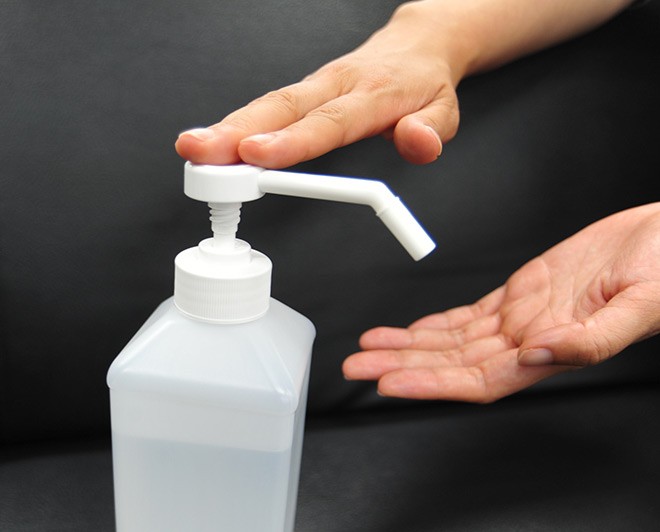 Hand-sanitizer dispensers are now a common sight. (The Asahi Shimbun)

The girl has since recovered and been discharged from a hospital, but her case caused quite a scare and prompted precautions in using alcohol-based sanitizers among children.

The incident occurred on the afternoon of March 28, according to the Unnan city government in Shimane Prefecture.

The girl, who was at the nursery school at the time, said she felt dizzy and could not stand up. Her parents were contacted, and they took her to a hospital in the city.

Although she was treated with an intravenous drip and other methods, she became unresponsive at the hospital.

She was taken to Shimane Prefectural Central Hospital in Izumo, and arrived there unconscious, officials said.

Doctors were unable to find anything abnormal in her tests, including a magnetic resonance imaging (MRI) scan, that could explain her condition.

She regained consciousness at 9:30 p.m. that day. She said she had licked alcohol-based sanitizer on her hand during nap time at the nursery.

Doctors then found her blood-alcohol concentration level was quite high, at 120 milligrams per 1 deciliter. She was diagnosed as suffering from acute alcohol poisoning.

Tomohiro Hirade, a pediatrician at the hospital who saw the girl, said although the amount of alcohol that causes acute alcohol poisoning depends on a person’s weight, the girl could have consumed between 30 and 50 milliliters of alcohol because she said she had licked the sanitizer around 10 times.

The girl also said she had sniffed or licked the sanitizer before.

“Children might put hand sanitizer in their mouths because they may be curious about its smell or taste,” Hirade said. “It is necessary to disseminate the information that even a small amount of hand sanitizer could make children suffer from alcohol poisoning.”

Acute alcohol poisoning can damage the liver, lower blood-sugar levels and even lead to death.

The nursery school had allowed children aged 4 or 5 to freely use the hand-sanitizer dispenser after they learned how to operate it.

The day after the incident, the Unnan city government instructed all nursey schools in the city to keep alcohol-based hand sanitizer out of the reach of children and allow them to use it only under the supervision of staff members.

The Japan Poison Information Center in Tsukuba, Ibaraki Prefecture, says it received between 49 and 56 reports a month of poisoning from ethanol-based disinfectant from February to April 2020, when the novel coronavirus was spreading.

The figures were roughly twice those for the period through January 2020.