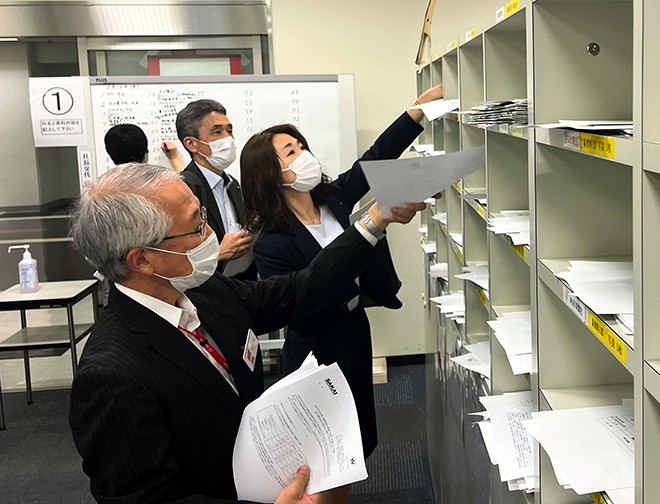 The weaker yen has helped listed companies post record net profits for the fiscal year that ended in March, but those sky-high earnings are not expected to trickle down to employees or consumers.

Many major companies have been hesitant about raising their employees’ salaries in light of the rising costs for imports, including ingredients, parts and fuel.

According to SMBC Nikko Securities Inc., 1,323 companies listed on what was then the First Section of the Tokyo Stock Exchange are expected to post a combined 33.5 trillion yen ($260 billion) in net profits, an increase of 35.6 percent over the previous fiscal year.

The study used actual profit figures announced by 577 companies as of May 11 as well as estimates of companies that will soon announce their earnings reports.

The previous record for net profits was about 30 trillion yen set in the fiscal year that ended in March 2018, before the novel coronavirus pandemic.

The surge in prices for petroleum and other natural resources following Russia’s invasion of Ukraine also lifted the earnings of trading companies.

Net profits for companies in the transport equipment sector, including automobiles, soared by 47.2 percent over the previous fiscal year, while electric equipment manufacturers recorded an increase of 24.9 percent.

But the rising prices for imported petroleum and natural gas pushed down the net profits of electric power and gas companies by about 70 percent.

Companies in the retailing and restaurant sectors are also struggling because domestic consumption has remained stagnant.

However, overall, the robust earnings are expected to continue in the current fiscal year.

The forecasts of companies that have already announced their earnings for fiscal 2021 indicate that sales will rise 7.9 percent year on year, operating profits will jump 11.8 percent increase, and net profits will increase 5.7 percent, according to SMBC Nikko Securities.

Ordinary consumers will probably not enjoy much of the benefits.

Labor ministry statistics released on May 9 showed that wages in real terms in March decreased by 0.2 percent year on year, marking the third straight month of declines.

In the recent “shunto” spring labor negotiations, management has been hesitant to comply with labor unions’ requests for wage hikes that match the recent increase in consumer prices.

Rengo (Japanese Trade Union Confederation) said the spring offensive negotiations have led to only a 2.1-percent wage increase as of May 6.

“Compared to corporate earnings, the rate of wage increases is low, probably because companies are not confident about continuing to gain stable profits in the future,” said Taro Saito, head of NLI Research Institute’s economic research department.

Employees of small businesses who account for about 70 percent of all workers in Japan received only a 2.02-percent wage increase in the latest spring offensive.

(This article was compiled from reports by Kyosuke Yamamoto, Keiichi Kitagawa and Jumpei Miura.)