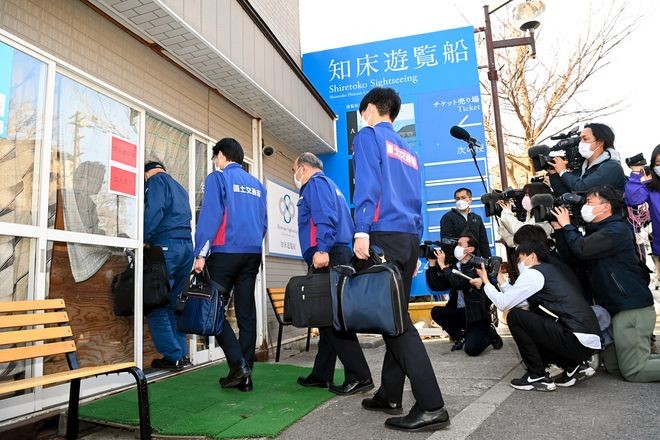 A panel of experts set up by the transport ministry to come up with steps to secure the safety of the tour boat industry in response to a tragedy off the Shiretoko Peninsula in eastern Hokkaido last month will need to scrutinize and evaluate the government’s regulatory safety procedures.

It must glean vital lessons from the accident to prevent a recurrence of the April 23 sinking that is presumed to have claimed 26 lives.

The boat operator was involved in two safety breaches last year, which prompted the ministry’s Hokkaido Regional Transport Bureau to conduct a special inspection and on-the-spot checks of the company’s compliance with safety regulations.

The boat’s logbook that was handed over for the special inspection was disclosed to the opposition Constitutional Democratic Party of Japan on May 13. It contains some disturbing facts.

For all of the 31 outings made on 15 days in July last year, the log shows the exactly same figures for wind speed, wave height and visibility. The records bear the private seals of approval of both the company’s president and the boat’s skipper.

This suggests the operator showed total disregard for following the regulations to keep passengers safe. Surprisingly, however, the bureau’s report on the inspection compiled in October said the log was “properly managed.” It also “confirmed” that the company’s “safety awareness and commitment to compliance had been improved.”

We cannot help wonder how the bureau reached this conclusion.

The regulator’s oversight lapses are not limited to last year.

Three days before the latest incident, the Japan Craft Inspection Organization, which is supervised by the transport ministry, conducted its own inspection of the company’s operations.

On that occasion, the still missing skipper of the sunken tour boat applied for permission to switch to an ordinary mobile phone from a satellite phone for communications between the vessel and the company’s office.

Authorization was granted with the proviso that skipper would operate only within the wireless service area. But after the accident, it emerged that the boat was out of range most of the time.

It is hardly surprising that the bereaved families of the victims harbor serious doubts about the regulator’s guidance and oversight.

Transport minister Tetsuo Saito has only commented he would “take sincerely” the fact the accident took place despite the ministry’s special inspection.

Another special inspection of the company is under way in response to the accident. When key parts of the process are completed, Saito should hold a news conference and offer “sincere” answers to questions in the minds of the families and the public.

The accident has some important parallels with a deadly ski bus crash in Karuizawa, Nagano Prefecture, in January 2016. Both incidents involved sloppy operational safety procedures that were overlooked by regulators.

In response to the ski bus disaster, the government revised the law to tighten its regulation and oversight of operators of chartered buses. Each operator’s records of accidents and administrative punishment are now available for public scrutiny. No deadly bus accident has occurred since then.

The panel of experts discussing tour boat safety is expected to learn lessons from this as well as accidents as it drafts an interim report in July and publishes a final report by the end of the year.

In addition to examining the reality of the tourist boat industry to identify possible safety problems, the experts also have a responsibility to scrutinize the approach and system in which the industry is regulated in order to propose effective safety measures.