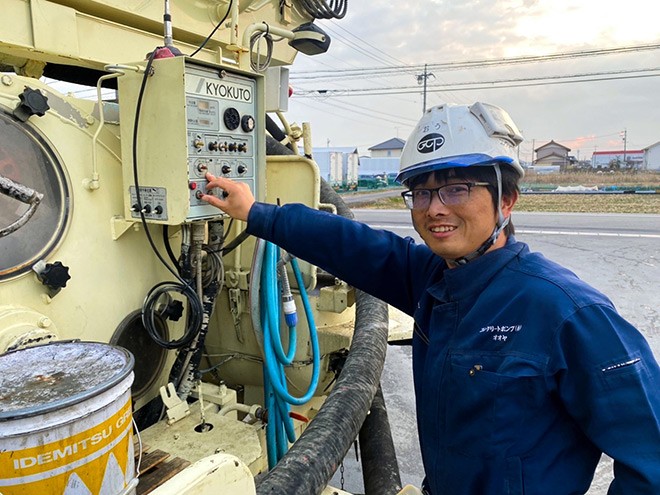 Weng Fei, the first foreigner to be given the Class II status under the new “specified skills” visa system, poses for a photo. (Provided by the Cooperative of Eco Project)

KAKAMIGAHARA, Gifu Prefecture--Construction company employee Weng Fei has worked in Japan for nearly a decade but still faced the hardship that non-Japanese working in the country struggle with: having to leave his family behind.

But Weng, 35, who has just been granted Class II status under Japan’s “specified skills” visa system, can now bring his family from China and live in the nation for an unlimited time.

Three years after the framework was introduced in the hope of bringing more workers to Japan from overseas, Weng became the first foreigner in April to be recognized as having excellent skills under the upgraded visa certification mechanism.

“I am most happy that I can have my family come here and live with me from now,” said Weng while explaining his passion for work in the future.

In November 2010, Weng arrived in Japan for the first time to learn building skills. He worked at Concrete Pump, a construction firm in Kakamigahara, for three years as a technical intern, before returning to his homeland.

As Tokyo took an emergency measure to accept foreign construction workers to alleviate the dire labor shortage among contractors, Weng again came to Japan in May 2015. Following his three-year employment at Concrete Pump, Weng returned to China.

His third visit to Japan came in November 2018 to serve as a technical intern. In two years, the total period he spent in Japan as a trainee exceeded a certain specified duration in November 2020.

Weng therefore switched to the specified skills visa in the Class I category, under which a certain level of skill is required for foreign workers to stay in Japan for an additional five years.

As a chief engineer at Concrete Pump, Weng accumulated experiences to refine his techniques for a year or so. He passed a national exam on the method of pouring concrete into molds, meaning he was ready to be awarded the Class II status.

Two months after his application, a renewed resident card for the Class II category was delivered to Weng on April 13. He had worked in Japan for a total of nine and a half years.

LIVING APART FROM FAMILY FOR 2 YEARS

Previously, Weng had to return to his home nation tentatively due to the ceilings on visa lengths. It was impossible for him to bring his wife, 35, and their 12-year-old eldest son from China to live together.

Behind the issue was Japan’s legal mechanism of that time where technical interns and other foreign workers could not reside with their loved ones in the country.

As criticism against the “inhumane” system continued for many years, the specified skills visa framework was put in place in April 2019 for partial improvement.

This enabled foreign trainees in specific industries to continue working in Japan as they can shift to Class I by getting through language and skill screenings and then to Class II under the newly introduced setup.

Whereas living with families is not allowed under Class I, non-Japanese workers can be accompanied by their relatives with no time limitations in Class II. Under both categories, visa holders are able to change their workplaces at their own will.

Since his third arrival in Japan, Weng has been living in his employer’s dormitory. The novel coronavirus pandemic has rendered it unrealistic for him to make even a brief return to China, so Weng has not seen his family for two years.

Now that Weng has obtained the Class II status, he will be reunited with his wife and son in Japan in the not-so-distant future.

With no visa duration limits imposed, Weng currently has clearer prospects for his career.

“I want to learn more to master Japanese and vocational techniques in order to contribute to my company,” Weng said.

Weng, as a foreman, participates in meetings of Japanese and non-Japanese staff members and develops work plans in Japanese. He pays so careful attention to work procedures and subordinates that he has reportedly won the firm confidence of supervisors and others at construction sites.

“He (Weng), with his diligence and exceptional skills, leads staffers,” Kano said. “It is beneficial for employers that good workers can be hired for prolonged periods.”

According to Kano, two other Chinese workers at Concrete Pump are likewise gearing up their applications for Class II.