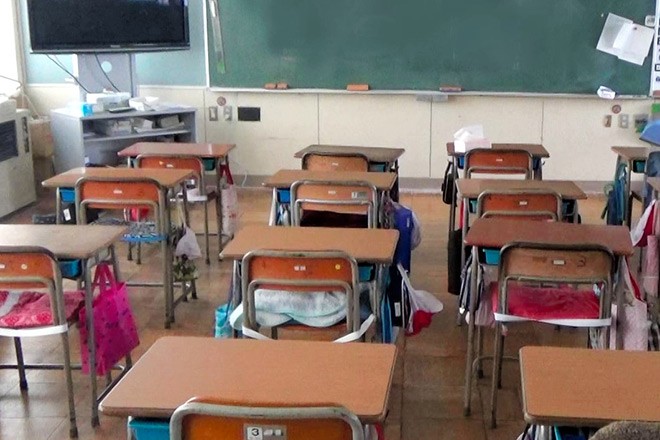 A teacher in her 50s at a ward-run elementary school in Tokyo heard the school’s principal utter something surprising at a staff meeting in early April.

“It has been decided that the new educator we expected to come work with us will not actually come work here,” the principal said.

The new teacher would not be sent to the school, which meant another homeroom teacher had to be found.

Public schools are facing shortages of teachers across Japan shortly following the beginning of the new academic year in April.

Fewer permanent teachers, coupled with job seekers’ tendencies to shy away from becoming educators due to the long working hours, are believed to have resulted in the current deficit.

“The issue may have arisen from fewer people wanting to serve as teachers,” said an official of Tokyo’s board of education.

The education ministry conducted its first survey over the issue last fiscal year, revealing 1,897 public education facilities nationwide are short of 2,558 teachers as of April last year, when the school year started.

School operators could face increased serious teacher shortages from now, too, if more staff members take time off because of such reasons as illness or childbirth.

An expert called for a better occupational environment for educators after special steps had been taken that included a teacher originally hired only for small-group instructions being put in charge of a full-size class, to the detriment of the class.

A staff member at the elementary school in Tokyo who had just returned from maternity leave ended up taking the class now without a homeroom teacher, though the staffer was supposed to only educate children about math exclusively in small groups.

The school ended up stationing educators in all its classes, but it became difficult to provide small-group lessons like in the last fiscal year and previously.

Statistics by the capital’s educational board show publicly run elementary schools in Tokyo were struggling to secure 50 teachers as of April 11.

Tentative teachers are secured every year to fill in holes discovered after the overall class number for the new semester is finalized. They are chosen from a list made up mainly of those who have a teaching license but have yet to be employed.

Not enough teachers were procured this year because many refused the offer for such reasons as "having found a job elsewhere.”

It is unusual to have a shortage of teachers in the capital, where there was long said to be a lot of would-be educators from the academic year’s beginning.

The outcome is, however, unsurprising when considering that the competitive ratio for elementary school teachers has been as low as one in two applicants.

The education board of Shimane Prefecture told the prefectural assembly that it is short of a record 32 teachers primarily in elementary schools on April 1.

Some reasons given were fewer people applying for teaching positions owing to the public perception that school staff must work long hours.

There are plans to have countermeasures, including re-hiring retired educators and having more new teachers, be implemented.

Public schools in Chiba Prefecture, except those in Chiba city, are 348 educators short as of March this year, according to the prefecture's board of education, which examines each month how many extra teachers those schools need. It is the most needed since measurements began.

With this in mind, Akira Nakagawa, general secretary of the Chiba branch of the All Japan Teachers and Staff Union, distributed leaflets demanding more teachers be dispatched.

“We have a far stronger sense of crisis as the burden on school staff grows heavier,” Nakagawa said.

The ministry in April this year asked a system be better taken advantage of wherein those who do not hold a teaching license but have professional careers and profound knowledge and experience in other fields can provide lessons at schools.

“The primary factor behind the issue is that the number of new permanent educators was slashed too much under financial difficulties as there will likely be far fewer children in the future given the dwindling birthrate,” said Aki Sakuma, a pedagogical professor at Keio University, who is well-versed in the problem of teaching staff shortages.

Sakuma added, “That created a situation soon after the new fiscal year’s start where operators have no choice but to depend on nonregular staffers.

“On top of this, now that it is widely known that teachers need to work long hours, schools are running out of those who hope to become temporary educators in a bid to work eventually as part of permanent schooling staff.”

The situation is much worse at disabled children's schools.

A prefecture-run school at one time hired two teachers for a class, though it requires three classroom educators.

Some students there need artificial respiration and other forms of medical care. Students also need to be closely monitored because they sometimes leave the classroom without telling the teachers. Thus, a lack of staffers can lead to dangerous situations.

A teacher in her 30s at the school lamented the circumstance.

“I feel like it is thought of as acceptable to not send a sufficient number of teachers to classes for disabled children,” she said. “It is unforgivable.”

(This article was written by Yukihito Takahama and Senior Staff Writer Mayumi Ujioka.)