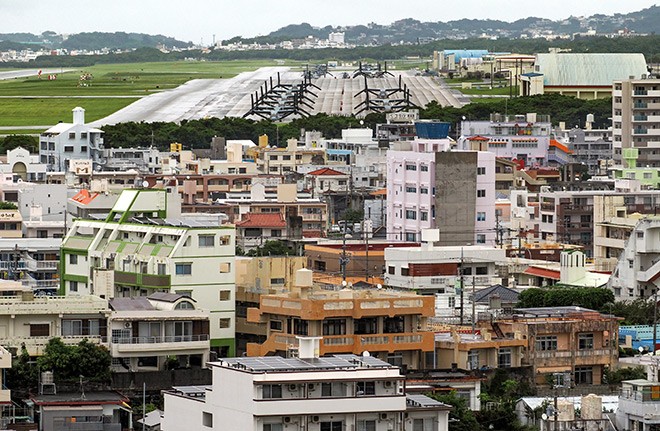 NAHA--Okinawa this weekend will mark the 50th anniversary of its return to Japanese sovereignty, a bittersweet moment for the southernmost prefecture that still shoulders the bulk of the burden in hosting U.S. bases in Japan.

The May 15, 1972, handover ended 27 years of U.S. administration that was ushered in after U.S. forces emerged victorious in the 1945 Battle of Okinawa, which saw some of the bloodiest fighting in the Pacific War.

Although Okinawa only accounts for 0.6 percent of Japan’s total land area, it hosts about 70 percent of all U.S. military facilities in Japan.

Over the past half century, land on the main islands used by the U.S. military has been returned at a vastly faster pace than in Okinawa. The difference is stark: 60 percent versus 30 percent.

On May 13, the Okinawa prefectural assembly unanimously passed two resolutions and opinion papers, with one set calling on the government for a sharp scaling back of U.S. military bases in Okinawa and a comprehensive revision of the Japan-U.S. Status of Forces Agreement. The other set was a protest against a sex crime committed by a U.S. soldier in Okinawa last autumn.

Much has changed in Okinawa since it returned to Japanese sovereignty.

A questionnaire distributed to local senior high school students found that only 22 percent could correctly give the date on which the United States formally relinquished control of Okinawa Prefecture.

The concentration of U.S. military facilities in Okinawa is fiercely opposed by the majority of islanders already weary of deafening noise pollution from the roar of jets, environmental contamination caused by sloppy handling of toxic chemicals and crimes and accidents caused by U.S. military personnel.

As of December 2020, Okinawa prefectural authorities said 826 incidents involving U.S. military aircraft had occurred, including crashes and parts falling from planes in midflight. Over the same period, 6,068 U.S. military personnel were detained for various crimes.

Okinawa’s economy has thrived in the meantime. Prefectural gross product in nominal terms as of fiscal 2018 reached 4.5 trillion yen ($35 billion), or 9.8 times the level before Okinawa returned to Japanese sovereignty.

However, the manufacturing sector has not developed in line with the rest of Japan, forcing Okinawa to depend on tourism as a major revenue source. The COVID-19 pandemic dealt a massive blow to its tourist industry.

As a result, Okinawa ranks lowest among the nation’s 47 prefectures for local personal income.

A study by the Okinawa prefectural government in 2016 found that the poverty ratio among children was 29.9 percent, or double the ratio of the national average.