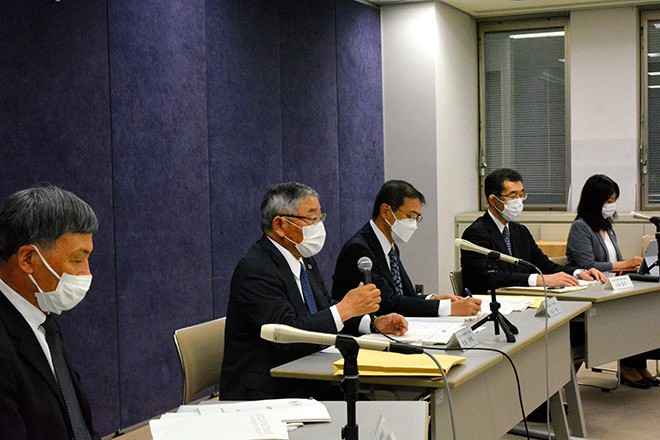 Nobuo Aoshima, second from left, the chairman of the third party panel looking into the 2021 landslide disaster in Atami, Shizuoka Prefecture, responds to a question at a May 13 news conference. (Koichi Tokonami)

SHIZUOKA--A third-party panel was scathing in apportioning blame for a deadly landslide at a resort city close to Tokyo last year that claimed at least 27 lives.

“The primary factor (behind the disaster) was the insufficient assessment and guidance on the part of the Atami city government,” the body said May 13 in its final report.

The Shizuoka prefectural government had asked the panel to ascertain how landfill high up in the steep mountainside overlooking Atami triggered the July 2021 landslide following days of heavy rain. One person still remains unaccounted for.

The panel said the damage could have been prevented or reduced if the Shizuoka prefectural and Atami municipal governments had taken appropriate measures.

The landfill was created based on a plan submitted in 2007 to the Atami municipal government by the previous owner of the plot, a resident of Kanagawa Prefecture, according to officials of the two local governments.

Once the landfill work was completed, it came to a height of about 50 meters, or more than three times the figure given in the design blueprint. Disaster prevention measures were also deemed insufficient.

The panel accused the Atami municipal government of not being sufficiently vigilant when it accepted the plan in 2007, citing the fact that a number of key sections, including disaster prevention measures, had not been filled out.

Public documents released by the two local governments in 2021 show that Atami city in 2011 considered ordering the previous owner of the landfill site to take steps to ensure proper safety measures were in place. The Shizuoka prefectural government also gave its consent for issuing the instruction.

But none was issued because the owner by then had begun taking disaster prevention steps.

City officials said they decided not to issue the order as a certain degree of safety had been secured. However, the report pointed out there was no record in the documents of how the city government confirmed the appropriateness of the safety measures.

The report also said the Shizuoka prefectural government should have more aggressively pushed the Atami city government in this regard.

It noted that the two local governments had numerous opportunities to stop the inappropriate creation of the massive landfill. It concluded they should have worked together to consider how to deal with the problem, but instead were too reticent about forcing the issue.

“The heart of the problem is the failure of the administrative sector to take decisive measures,” it added.

Takashi Namba, the Shizuoka vice governor, who attended the May 13 news conference at which the report was announced, said, “I feel a sense of responsibility for the inappropriate response.”

Atami Mayor Sakae Saito said, “I sincerely accept those parts that I should reflect on, but overall I found the report less than convincing because the evaluation lacked balance.”

(This article was written by Sokichi Kuroda and Eiichi Murano.)