Kishida unveils plan to turn part of U.S. base into public park 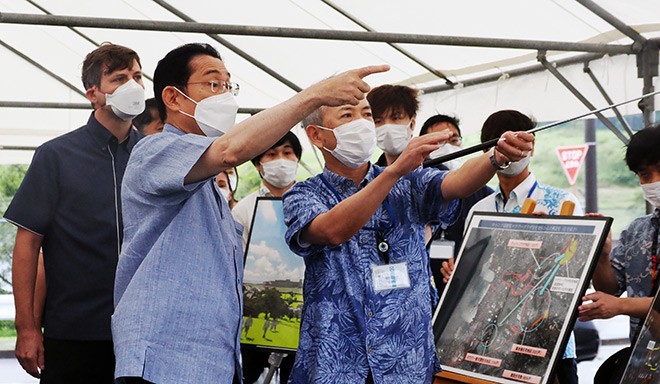 KITA-NAKAGUSUKU, Okinawa Prefecture--Prime Minister Fumio Kishida announced May 15 that Tokyo and Washington are expected to soon reach agreement on transforming part of a U.S. base in Okinawa Prefecture into a public space filled with greenery.

His announcement coincided with a ceremony being held the same day in Ginowan to mark the 50th anniversary of the return of Okinawa from U.S. control to Japanese sovereignty.

U.S. bases are a very sore issue in Okinawa Prefecture, which hosts about 70 percent of all U.S. military facilities in Japan.

The site is part of the U.S. military’s Camp Foster, also known as Camp Zukeran, which is scheduled to be returned to Japan in fiscal 2024 or thereafter. The designated space is called the Lower Plaza Housing Area.

Kishida said after taking an inspection tour of the facility that both Japanese and Americans will be able to use the land now used for housing as a public park ahead of the plot’s return to Japan.

“I am hoping that both sides will make heavy use of it,” he added.

Kishida also mentioned the government’s willingness to assist local authorities in making the best use of the former U.S. military site.

“The government will give its full support over how the land will be used for the development of Okinawa Prefecture as a whole,” he pledged.

Kishida has been visiting the southernmost prefecture since May 14 ahead of the commemoration ceremony.