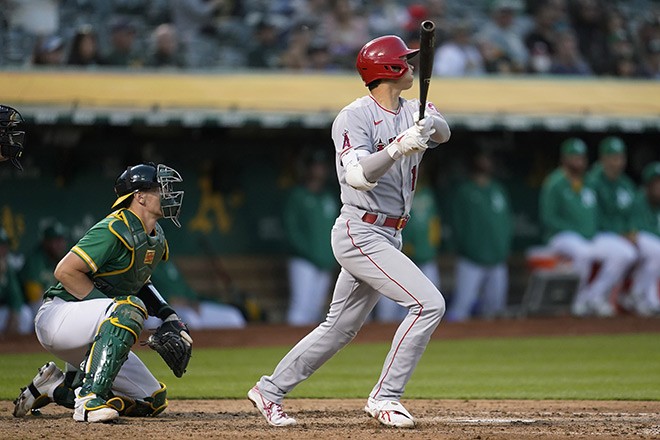 OAKLAND, Calif. — Shohei Ohtani and Taylor Ward provided just what the Los Angeles Angels needed to get over a bad loss in the opener of a day-night doubleheader.

Ohtani hit his 100th career home run, Ward hit a grand slam and the Angels salvaged a split by beating the the Oakland Athletics 9-1 in the nightcap Saturday.

The A's won the opener 4-3 when Luis Barrera overcame a couple of earlier blunders by hitting a walk-off, three-run shot for his first career home run.

“Give our guys credit,” Angels manager Joe Maddon said of the response in Game 2. “Not an easy loss to endure. We did it, I thought really well.”

The Angels took little time to rebound in the second game with Ward hitting his second slam of the season in a five-run second inning against Adam Oller (0-3).

“One hundred is a big number,” Ohtani said through an interpreter. “I’m proud of it. But it's early in the season.”

“He does it every day,” Maddon said. “It’s not surprising anymore. I don’t want to say expecting it, but we're expecting it. That's just who he is right now. He’s going to keep adding on to that. You're going to hear more names, more milestones. He's a baseball player. He loves to play.”