Okinawa marks half century since handover from U.S. rule 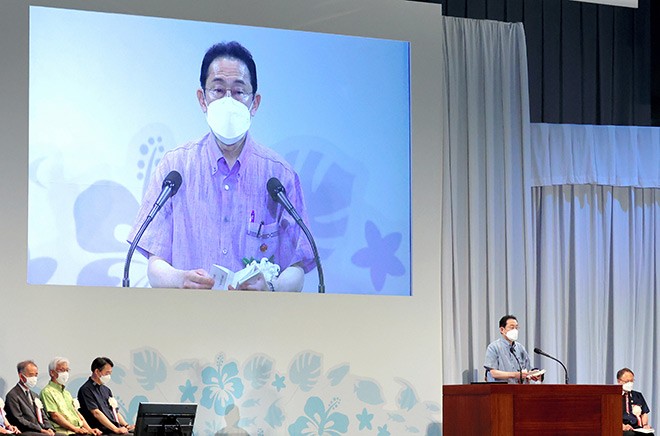 Prime Minister Fumio Kishida delivers an address May 15 during a ceremony in Ginowan commemorating the 50th anniversary of Okinawa Prefecture’s return to Japanese sovereignty. (Koichi Ueda)

GINOWAN, Okinawa Prefecture--The island prefecture of Okinawa on May 15 marked the 50th anniversary of its return to Japan from U.S. rule, still chafing at the heavy concentration of U.S. military bases and its uphill battle to make its economy self-sustaining.

Emperor Naruhito addressed the commemoration ceremony online from the Imperial Palace in Tokyo with Empress Masako.

Prime Minister Fumio Kishida praised the Japan-U.S. efforts of more than five decades ago that led to Okinawa’s reversion to Japanese sovereignty in 1972 after 27 years of U.S. occupation.

“It is extremely rare historically for a country to recover its territory lost in war through diplomatic negotiations,” he said. “It was made possible due to the friendly relations and trust between Japan and the United States.”

He referred to the southernmost prefecture as a gateway to Asia, saying it has huge potential as a hub of international exchanges.

Kishida also renewed a central government pledge to reduce the burden borne by Okinawa in hosting about 70 percent of all U.S. military facilities in Japan even though it accounts for only about 0.6 percent of the country’s total land area.

Islanders for the most part bitterly resent the massive U.S. military presence.

“We take this fact to our hearts and will make utmost efforts to ease Okinawa’s burden,” Kishida said.

The ceremony was held in the Okinawa Convention Center in Ginowan, where the U.S. Marine Corp. Air Station Futenma is located.

Although Tokyo and Naha remain at loggerheads over a reclamation project to relocate the functions of the Futenma facility to a base under construction off Nago, also in the prefecture, neither of Kishida nor Okinawa Governor Denny Tamaki broached the thorny subject.

Tamaki, who took the podium after Kishida to give his address, expressed his appreciation to the central government for its continued economic assistance to Okinawa under five 10-year programs, as well as other aid projects, to develop the prefecture and its economy.

“The gap between Okinawa and the rest of Japan has narrowed (due to the assistance) and Okinawa’s social economy has steadily progressed,” he said.

However, Tamaki said Okinawa still has a long way to go to build a self-sustaining economy, one of the goals islanders have striven to achieve since the handover 50 years ago. Per capita income in the prefecture is around 70 percent of the national average.

Tamaki also remarked that Okinawa and the central government shared the same vision at the time of its return to Japan: that the island prefecture would soon be one of peace.

He noted that this has not materialized, citing Okinawa’s disproportionate base burden.

Tamaki called on the central government to work to promote the significance of Okinawa’s reversion and the importance of pursuing lasting peace among the general public.

In his address, the emperor noted the many challenges facing Okinawa.

“I am hoping that the public at large, including the younger generation, will deepen their understanding of Okinawa and its people,” he said.

He said it would fall to younger generations to help Okinawa build a bright future.

Prior to the ceremony, an estimated 1,000 peace activists from around Japan held a rally to call for the removal of U.S. bases from the prefecture.

In a statement released for the gathering, Tamaki pledged to continue to strive for a reduction of the U.S. base burden.

(This article was compiled from reports by Shinichi Fujiwara and Akiko Tada.)