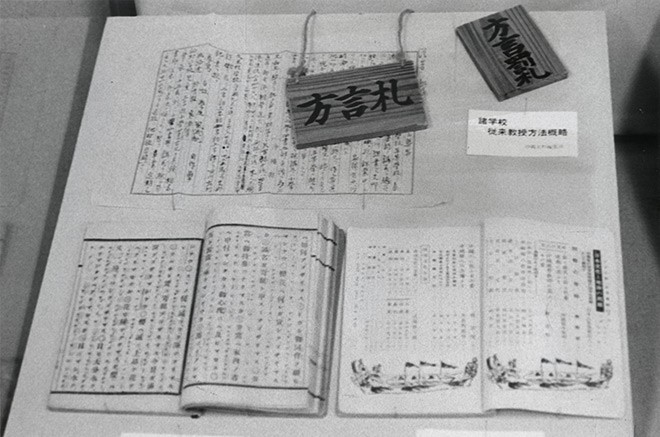 Replicas of “hogen fuda,” a wooden tag that Okinawan children were forced to wear as punishment for speaking local dialects, are shown at top right. (Asahi Shimbun file photo)

“Kerama mishi ga matsuge miran” is an Okinawan saying similar in meaning to the Japanese proverb “Todai moto kurashi” (It is often difficult to see what’s right in front of your eyes).

The Okinawan version literally means you can see the Kerama islands out in the blue sea, but you cannot see your own eyelashes.

Another example is “Toshi wa uma no hashiri” (Years run like a horse), the Okinawan equivalent to “Koin ya no gotoshi” (Time flies like an arrow). It also has a deep meaning.

However, UNESCO, a U.N. specialized agency, warned in 2009 that the traditional Okinawan language was in danger of disappearing.

Hidenobu Nakayama, 76, who worked for a local TV station for many years, is deeply worried about the future of the language.

He set up a group in the culture association in the Okinawan capital of Naha to keep “uchinaguchi” (the Okinawan language) alive and has devoted his energy to activities such as teaching it in schools.

“The number of people who can speak the language has been steadily decreasing,” Nakayama laments. “I am worried it will become extinct in a dozen or so years.”

The dialects spoken in the Ryukyu islands, which are mostly in Okinawa Prefecture, have gone through rough patches over the past 150 years or so.

They were disrespected when the Meiji government forcefully annexed the Ryukyu Kingdom in the 1870s.

Children who spoke the local dialects in classrooms were punished by being forced to wear a “hogen fuda” (dialect tag).

The number of people who spoke the languages fell further as Okinawa was governed by the U.S. military after World War II and returned to Japanese sovereignty in 1972.

Being a speaker of a local dialect “offered no benefits with regard to receiving a higher education or seeking employment,” says Nakayama.

When I heard his story, I remembered how the Welsh language was rehabilitated.

In the 16th century, Wales was incorporated into the Kingdom of England. Its language, overpowered by English, was banned.

It was not until the 20th century that the Welsh language started being used again in education. TV channels that broadcast in Welsh were launched, and it acquired the official language status 11 years ago.

It was an achievement made possible by Welsh people placing pride in, and passion for, their homeland.

“Umari jima nu kutuba washinne, kunin washiyun,” another kugani kutuba, warns that if you forget the language of your native island, you will forget your homeland.

Let us hope that such a rich language will continue flourishing forever.