EDITORIAL: ‘What is Japan?’ question lingers 50 years after Okinawa’s return 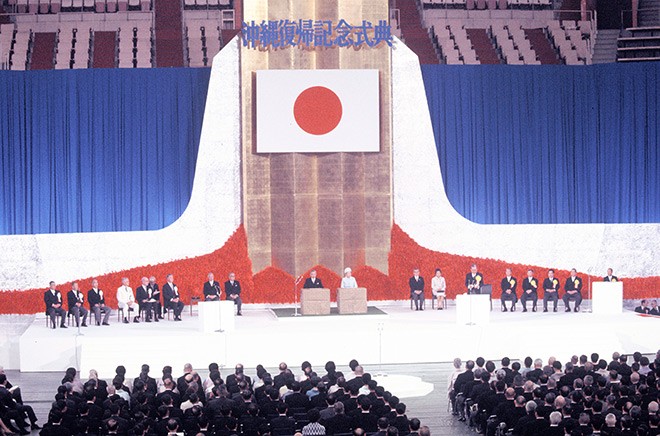 Prime Minister Eisaku Sato speaks at a ceremony to mark Okinawa’s reversion to Japanese sovereignty at the Nippon Budokan hall in Tokyo on May 15, 1972. (Asahi Shimbun file photo)

Author Ryotaro Shiba (1923-1996) visited Okinawa Prefecture for his serial travelogue “Kaido wo Yuku” (On the highways) in April 1974.

It was the most pleasant time of the year to be in the southern prefecture, locally known as “urizun,” but the visit made Shiba pensive.

He wrote that every single fragment of what he saw and heard was “asserting itself like a towering presence” and made him “brood, like it or hate it, over the question ‘What is Japan, after all?’”

Okinawa at the time must have retained more of its traditional culture and distinctive landscapes than it has today. They are slightly different from those of mainland Japan but bear signs of connection to the latter at the same time, calling for a modification to the perception of what “Japan” is.

May 15 marks 50 years since Okinawa was returned to Japanese sovereignty.

When we look at the situation facing the island prefecture, we cannot but repeat the same question asked by Shiba--“What is Japan, after all?”--in a different context.

CAUGHT BETWEEN JAPAN AND U.S.

Japan wanted Okinawa to be returned on April 1, 1972. The United States argued the date should be July 1 of that year. They compromised in the middle on May 15, 1972.

The decision is symbolic enough of the history of Okinawa, which has been at the mercy of the two countries.

Japan used Okinawa as a “sacrifice stone” of sorts for delaying decisive fighting on the mainland during World War II. Once the war ended, Okinawa was placed under U.S. military administration.

Japan espoused a pacifist Article 9 in its postwar Constitution, while relying on the United States for the defense of its territory.

Emperor Hirohito (1901-1989), who was supposed to be “combining in himself the rights of sovereignty” under the Constitution abolished after the war, sent a message to the U.S. side saying that he “hopes that the United States will continue the military occupation of Okinawa and other islands of the Ryukyus.”

U.S. troops built many military bases in Okinawa Prefecture. They also relocated the military units that had to leave mainland Japan, in some cases after facing opposition campaigns of local residents, to the southern prefecture.

In returning to Japanese sovereignty, the Okinawans hoped to escape from a situation where decisions that affected themselves were made by others, irrespective of what they wanted or thought. They also wanted to see the presence of U.S. military bases in the prefecture reduced to levels “on par with the mainland.”

The reality never turned out that way.

The burden of U.S. military bases has become even greater.

The island prefecture, which accounts for only 0.6 percent of Japan’s total landmass, hosts about 70 percent of all facilities dedicated to the U.S. military in Japan. That extraordinary state of affairs was brought to “perfection” after Okinawa’s reversion to Japan.

The return to Japanese sovereignty certainly ended foreign rule of that sort.

However, we can only say that the behavior of the Japanese government that is elected and given a mandate by the public has little differed from that in essence.

Tokyo has sent out waves of riot squads and patrol vessels and turned a deaf ear to Okinawans’ repeated manifestations of a “no.” It also concealed information and made extensive use of law-evading approaches to contain local protests.

All these are what the central government has been doing over the land reclamation work off the Henoko district of Nago, Okinawa Prefecture, to relocate U.S. Marine Corps Air Station Futenma, which is currently in Ginowan, also in the prefecture.

The Okinawans have consistently called for reduced burdens of U.S. military bases. Around 2010, they also began maintaining that they are being “discriminated against” by people on the mainland.

“Is it Okinawa, or mainland Japan, that is taking advantage of the situation?”

Former Okinawa Governor Takeshi Onaga (1950-2018) asked this question, as pointed as an arrow, that bites into the heart.

In comparison, people on the mainland appear to be trying to hide under their hardened callousness.

Turning their eyes away from the tough question, they dismiss the Okinawans’ dissent, apparently oblivious of the way they have enjoyed peace at Okinawa’s sacrifice throughout the postwar period.

Some say it just “can’t be helped because it’s all about security.” Others complain that the Okinawans “continue grumbling just too long.”

In recent years, there has been even slander and verbal attacks against the voices being raised in Okinawa.

We have a set of disquieting figures.

In a nationwide survey taken by The Asahi Shimbun 10 years ago, 21 percent of respondents said they were OK with the current state of U.S. military bases in Okinawa Prefecture. A combined 72 percent said the bases should be either reduced or removed totally in the years to come.

In a similar survey taken earlier this year, 41 percent of respondents said they were fine with the bases remaining the way they are, about double the corresponding figure a decade ago.

The figure is only slightly short of the combined 52 percent who said the bases should be reduced or eliminated, although a simple comparison is precluded by differences in the survey methods used and other circumstances.

“There is no forecasting at all whether it will take 10 years or 20 years before we will be hosting military bases only at the same levels as the mainland,” Seizen Nakasone (1907-1995), who led the all-female Himeyuri Student Corps during the 1945 Battle of Okinawa, wrote in his diary ahead of the reversion to Japan. “At worst, the bases could be with us semi-permanently.”

That scenario is becoming more of a real possibility. If that is where we have arrived at after all these 50 years, we should ask, “What is Japan, after all?”

“Japan is prepared to use the Ryukyus in any way to gain advantage for Tokyo; it is ill-prepared to make sacrifices for the island people,” says a passage in a 1953 book by U.S. historian George H. Kerr (1911-1992).

That passage has been perceived in Okinawa as indicating a grain of truth.

If Tokyo has an objection to make, it should do so by taking corresponding action.

In response to China’s military buildup of recent years, the United States is shifting to a strategy of dispersed deployment and flexible operation of military units in the thought that it is risky to continue relying on large-scale military bases.

An expert panel of the Okinawa prefectural government last year presented a report saying that it is possible to seize the opportunity to have U.S. forces in Okinawa relocated outside the southern prefecture.

At a ceremony to mark Okinawa’s return 50 years ago, Prime Minister Eisaku Sato (1901-1975) said: “From today on, we, compatriots, can be together to share our joy and sorrow.”

That should not be turned into a false statement. The responsibility for living up to Sato’s remark lies with people on the mainland.