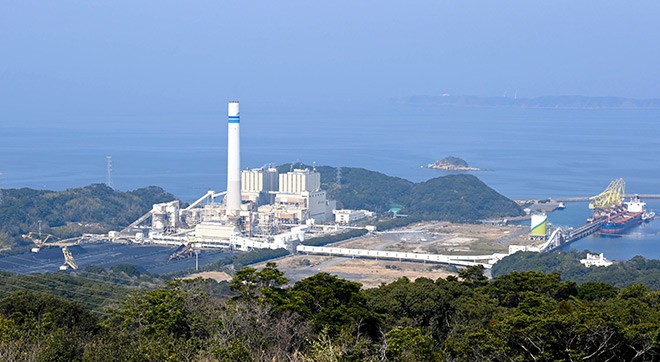 The Matsushima coal thermal power plant of Electric Power Development Co. (J-Power) is seen in Saikai, Nagasaki Prefecture, with a coal carrier beside it in March. (Keiichi Kitagawa)

SAIKAI, Nagasaki Prefecture--One recent evening, a ferry that arrived at a wharf in the central part of Saikai was seen crowded with men in work uniforms.

They were heading home after finishing their shifts at Electric Power Development Co. (J-Power)’s Matsushima thermal coal-fired power plant on a tiny nearby islet.

A resident of Saikai in his 30s said he is responsible for maintenance of the 1-gigawatt station with two generators.

“The facility offers one of the few places for employment around here for residents,” he said.

However, the coal power station, the primary employer in Saikai, is being rocked by the shift to a greener society.

In the ideal model of green growth, new industries are to be created through decarbonization so ample job opportunities will be created.

But the kind of reform in energy policy deals a blow to local economies such as Saikai's. The circumstance facing coal power plant workers and others on the isle highlights difficulties in “just transition,” raising the question of how to balance employment and environmental conservation.

Situated 1 kilometer west of the mainland of Nagasaki Prefecture, the Matsushima islet once thrived on whaling and mining. It is connected by ferry with the mainland side of Saikai city, which has a population of 26,000.

Whereas there are ryokan inns, the city hall and other public establishments nearby, many buildings on Saikai are left unoccupied.

Employees and subcontractor staffers at the thermal plant, fitted with a 136,000-square-meter open-air coal depot that is about the size of three Tokyo Domes, total 500. Some 1,000 workers show up for its annual inspection held for two to three months.

Burning coal emits a huge amount of carbon dioxide (CO2). For that reason, the government is looking to shut down old coal power stations, including the Matsushima establishment, as much as possible by 2030.

In April last year, J-Power announced it will equip the Matsushima plant’s No. 2 generator with a device to turn coal into gas in a bid to improve the electricity production efficiency by 10 percent.

Similarly, biomass and ammonia will be mixed in to reduce CO2 emissions under future plans. A new technology to recover and store CO2 is likewise eyed at the station.

Raising the generation efficiency with those efforts, however, does not appear to be enough to address the extremely hostile climate surrounding the power plant.

Based on the results of its environmental assessment, the government demanded “all alternatives, such as the review of the entire business, be considered unless the path for CO2 emissions reduction is cleared.”

A red-brick building that used to serve as a winch warehouse, a former electrical substation and other coal mine remnants are scattered through Matsushima.

According to the accounts of Kazufumi Shibue, 72, who is knowledgeable about the islet’s history, the last coal mine on Matsushima was closed down in the first half of the 1960s.

The No. 1 generator of the Matsushima thermal plant started operations in 1981 as part of regional economic countermeasures against mines’ closure.

“I was really happy about young people returning at the time,” Shibue recalled.

Employees of J-Power participate in the traditional “peron” hand-driven boat race event, which is marked by drum and bell performances.

Shibue is alarmed at recent developments linked to the power plant.

“With decarbonization progressing, I wonder whether the station will really be able to continue to stay in operation,” said Shibue. “Losing the plant is a matter of life or death for us.”

Saikai Mayor Yasuhiko Sugizawa insisted that Matsushima can profit off the deal.

“We will attract corporations’ investments by taking advantage of decarbonization as a pillar in the town's development,” said Sugizawa.

On Enoshima island, 30 km northwest of Matsushima, an offshore wind power generating program is under way, as the islet is deemed by the government as a “promising site” for electricity generation.

Doubts and uncertainty exist if the envisioned offshore wind turbine can generate as much employment as the coal power station currently does and how greatly the greener facility will contribute to the local economy.

“I can understand the need for decarbonization, but knowing how our lives will be affected comes first,” said a local industry insider, expressing doubts about the eco-friendly development plan.

The notion of just transition was proposed to render capitalism sustainable via achieving decarbonization while paying due consideration to local industries and employment.

Oil and coal businesses in Japan are smaller than their counterparts in Europe and the United States, so decarbonization is said to be proceeding smoother in the energy industry of the country.

Akihisa Kuriyama, a researcher at the Institute for Global Environmental Strategies (IGES), said it is estimated that 300,000 to 500,000 employment opportunities will be created by renewable energy projects, compared with 20,000 to 30,000 individuals expected to lose jobs due to thermal power generation scaled down for decarbonization.

Still, Kuriyama noted injecting huge funds into sectors to be impacted is inevitable.

“Trillions of yen are being spent to compensate for disappearing industries and employment opportunities in Germany,” he said. “That sort of support is indispensable for decarbonization.”