Nothing has changed in Okinawa in 50 years, many say 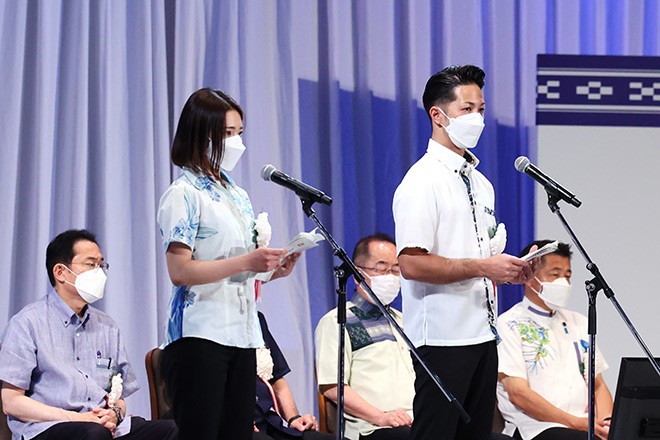 Shinya Futenma, right, and Miyabi Heshiki deliver a speech at a ceremony to mark the 50th anniversary of the reversion of Okinawa to Japanese administration on May 15 in Ginowan, Okinawa Prefecture. (Koichi Ueda)

GINOWAN, Okinawa Prefecture--Kiyoko Tokashiki recalls braving the pouring rain in a park in 1972 to protest the reversion of Okinawa to Japan while U.S. military bases remained concentrated in the prefecture.

Near the site of that protest, Tokashiki, now 82, attended a ceremony in Ginowan, Okinawa Prefecture, on May 15 marking the 50th anniversary of the reversion.

Rain was pouring down in the morning. And it was not the only similarity between the two periods.

“Like 50 years ago, the bases are still concentrated (in Okinawa), and we are forced to bear it,” Tokashiki said.

About 800 people were invited to attend the ceremony to reflect on the past and express hope for the future.

Many questioned the meaning of the reversion for the local population.

“I feel that the Okinawa Prefecture that we wanted is only half done,” Masakatsu Takara, 82, said in a speech at the ceremony.

Takara heads a group that operates the Tsushima-maru Memorial Museum in Naha.

The Tsushima-maru was a Japanese ship that was carrying people fleeing from Okinawa ahead of an expected U.S. invasion during the Pacific War.

A U.S. submarine sank the ship with a torpedo, killing about 1,500 people, including 784 children.

Takara, 4 years old at the time, survived the sinking. But nine of his family members died.

He has operated a dental clinic in Naha, while passing down memories of the Tsushima-maru tragedy.

He said he has hoped that Okinawa would be a source of world peace, but in reality, U.S. bases are everywhere in the prefecture.

“In the past 50 years, lifestyles and food have changed,” Takara said after the ceremony. “Still, bases are concentrated on this small island. In essence, nothing has changed.”

Miyabi Heshiki, 20, a second-year university student from Naha, spoke at the ceremony as a representative of Okinawa’s youth and co-chair of a volunteer group that tackles child poverty issues.

“I want people to know about the issue of poverty in Okinawa, as well as the issues of wars and bases,” she said after the ceremony.

When she was an elementary school pupil, she asked her grandfather about his experience in the 1945 Battle of Okinawa as part of a school project on peace.

But the grandfather became silent, and she saw tears running down his face.

She said she learned that the battle “was so tragic that he still remembers it after more than 70 years.”

When she said the protesters face a lot of problems, her father replied, “It’s been the same since I was little because the situation has remained the same.”

She said her father’s words made her feel: “The way of thinking--that it is normal to have a base here--should probably be changed.”

Tokashiki, the 1972 protester, worked for the Ryukyu government under the U.S. occupation and served as a prefectural education board member after the reversion.

Despite her frustrations that U.S. bases in Japan are still concentrated in the island prefecture, she feels that young generations can become the voices of Okinawa and lead it in the future.

At an event after the ceremony, she saw young Okinawans performing traditional Ryukyu dances and island songs.

“I see hope when I see young people,” she said.

(This article was written by Noriki Nishioka, Shiori Ogawa and Kazuyuki Ito.)